D. Murph
May 4th, 2011
In this article: 1080p, camera, casio, casio EX-TR100, casio tryx, CasioEx-tr100, CasioTryx, digicam, digital camera, DigitalCamera, EX-TR100, pocket camcorder, PocketCamcorder, point and shoot, point-and-shoot, PointAndShoot, review, tr100, tryx, video
Given the sheer quantity of marketing muscle that Casio put behind the Tryx, you'd think the company was gearing up to rival Nikon and Canon in the DSLR space. Instead, out popped the outre device you see above. Without qualification, this is one of the strangest, most bizarrely designed cameras we've ever seen, featuring a pop-out display and a grand total of two buttons for operation. At 4.8- x 2.3- x 0.6-inches, it's certainly one of the slimmest, easy-to-carry point-and-shoots on the market, but is the absence of an optical zoom and a removable battery enough to tank an otherwise radical idea? Head on past the break for our two pennies.
%Gallery-122773%
Casio
0
SCORE
Engadget
N/A
Critics
1 review
70
Users - Not yet scored
N/A 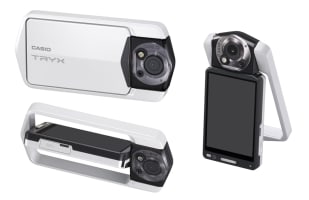 Let's be crystal clear here -- Casio's playing up the design angle hard on the Tryx. And unsurprisingly so, might we add. The chassis is undoubtedly the differentiating factor that separates this shooter from a myriad others that are currently cluttering store shelves, but the real question is this: does it matter? We've seen pop-out displays emerge on DSLRs -- where they're seen as helpful for budding video makers who need to shoot low-angle clips -- but Casio's taking a leap of faith by assuming the same theory will translate in the compact realm.

The outer "rim" that surrounds the optics and the 3-inch touchpanel is constructed of a markedly robust metal. We did our best can-crunching pose, and the frame barely flexed. All that's needed to separate the LCD from the frame is a solid shove, and things click back into place automatically once swung back around. Once exposed, the LCD is surrounded by an SDXC / SDHC / SD card slot, a mini HDMI output and a USB charging port. Each of those are covered by flimsy plastic clips, which we're guessing won't last a year given the assumption of normal wear and tear. The bezel is home to just two physical buttons: an on / off switch and a shutter trigger.

After you've moved the LCD out into the open, you can swivel it 360 degrees -- perfect for shooting low-angle video and self-portraits. The hinge does an excellent job of holding the LCD where you put it, yet it's smooth enough that it doesn't require the assistance of the Old Spice Guy to return it to its default position. The 12.1 megapixel CMOS sensor that dominates the face of the device is encased in a protective layer, and while we weren't able to scratch it during our recent jaunt to Grand Canyon, Petrified Forest and Joshua Tree National Parks, we're still leery that one or two tumbles could render all of your future photos a bit less idyllic.

As clever as the design is, we found ourselves struggling to unearth a purpose even after using it for a week. If you attempt to pop the LCD out and set it on a table for a timed group shot, you're foiled by the fact that it'll sit cockeyed on whatever surface you place it on. If you consistently shoot low-level video, the swiveling LCD is an obvious boon, and if you're a fan of filming your rollercoaster escapades, the handle (read: exposed rim) will certainly come in handy. Outside of that, though, we found no compelling reason to handle this thing unlike any other point-and-shoot. Compounding the problem is the fact that the entire rim is slick as glass, so you're taking quite the risk by holding the device in a closed fashion.

We also found the inability to zoom (optically, anyway) to be a huge downer. Sure, there's a digital zoom, but considering that you aren't a fan of heavily pixelated images, you might as well consider the EX-TR100 to be zoomless.

The user interface that Casio has loaded onto the Tryx is certainly sufficient. It's intuitive enough to navigate sans a trip through the dreaded user guide, and changing between modes rarely required more than two or three taps on the panel. Thankfully, the touchscreen is superbly responsive, and we never once had an issue with the camera recognizing our commands. We still prefer manual control dials and physical buttons when it comes to navigating through camera menus, but Casio does an admirable job of creating a touch-based UI that simply works.

As is common on point-and-shoots these days, the Tryx is home to quite a few shooting modes: Full Auto, Premium Auto, Best Shot, HDR Art, Slide Panorama and Motion Shutter (just to name a few). In our experience, Premium Auto seemed to render the best results for beginners who have no desire whatsoever to tinker with settings, while HDR Art was stunningly disastrous. If you're hoping to fiddle with ISO, aperture or any other number of manual settings, you're barking up the wrong tree. Impressively enough, the screen automatically rotates as you spin it around, and there's next to no lag in the changeovers. Also interesting is the fact that any video started while the camera is positioned in a vertical manner will result in a vertical video. Shocking, we know, but gnarly nonetheless. (Given just awkward it is to embed such a tall video, we'll point you to the YouTube sample here for external viewing.) Below, you'll find a few videos shot in NYC -- two in the day, one in a dimly lit eatery.


While we're on the topic, it's worth pointing out that this camera is capable of logging clips at 1080p, which is -- in our humble opinion -- the single most understated standout feature of the Tryx. A video can be started by tapping a small red record button in the lower right corner of the LCD, and we had no stuttering issues whatsoever using an off-the-shelf SDHC card. Unfortunately, it's impossible to start a video while shooting in panorama mode -- you'll need to switch into a standard automatic mode first, which seems like a ridiculous and unnecessary complication given just how terrific the panoramic mode truly is. In other words, we found ourselves glued to the panorama mode, but had to switch back and forth just to start videos.

Snapping photos was easy enough, but the sliver-of-a-shutter-button won't be pleasing to all. That said, we're thrilled to have a physical button given the dearth of other keys, so we aren't going to harp too boisterously on that point. Casio goes out of its way to keep things dead-simple from a photo snapping standpoint, and we have to confess -- the Tryx does an admirable job of capturing the moment in broad daylight. It automatically flops over to Macro mode if it senses that you're too tight on a subject, and it did a laudable job of capturing hues and tone on challenging scenery at some of America's most stunning National Parks. Are we talking DSLR-quality? Hardly, but remember that the MSRP on this is but $250, and it's already selling for $229 at a smattering of reputable e-tailers.

The panorama mode, however, deserves a round of golf claps all its own. We adored the feature on the company's Exilim EX-H20G, and we found it even easier to use on this guy. The results are nothing short of spectacular, and the automatic stitching job is downright impressive.

The 12.1 megapixel CMOS sensor does predictably well in broad daylight. Colors were generally sharp and crisp, and for a sub-$250 point-and-shoot, we really had no qualms with our results. Once the light starts fading, however, it has a difficult time snapping a usable image free of blur. Expected, sure, but having full manual control access would've come in handy here. Considering that there's no optical zoom, you'll be forced to move forward and back to change what's in the frame. It's pretty obvious that still images aren't this camera's forte, but it certainly does a better job with 'em while also handling 1080p video than any of Flip Video's (now-defunct) camcorders ever did. Have a gander in the gallery below to get a feel for the image quality -- just so you know, these are completely untouched aside from a resize.
%Gallery-122776%

You're probably wondering why an atypical point-and-shoot deserves a battery section, so we'll just cut to the chase: the longevity of the Tryx is startlingly poor. 50 still images and 20 minutes of capturing 1080p footage had our review unit hanging on for dear life, and we aren't confident that a full charge is capable of lasting through a solid hour of filming. That may be forgivable if a few other things were true, but they aren't.

Those "other things" include a removable battery and a conventional micro-USB port. For whatever reason, Casio decided to completely encase the Li-ion here, making it impossible to access, remove or replace. We couldn't rely on this guy to carry us through the daytime hours at a National Park, which led to us carry yet another camera as a backup -- there goes the advantage of being mobile, eh? To make matters worse, Casio threw a proprietary USB charging port on here, which makes absolutely zero sense to us.

What's so irritating about this decision isn't the requirement to carry around yet another cable in your pack; it's that Casio came so close to including a feature that we'd love to see on every single point-and-shoot from here on out. Had this camera been able to recharge via a standard micro-USB port (you know, like your Android smartphone, PND, portable media player, and 14 other gadgets you've got sitting around), it would have instantly become one of the most stress-free charging experiences to ever hit the P&S world. As it stands, we're flabbergasted with the design choice to select something other than a standard port -- there may be an awesome reason from an engineering standpoint, but if we can charge a Nexus One and a Columbia heated jacket through the aforesaid port, why not this?

Update: Casio reported 50 still shots with just over an hour of Full HD video, but it's hard to say how much time they spent simply toting the camera around with the LCD on -- you know, as a real-world user would. As always, battery life is full of YMMV, but now you've got an ideal look at what you could possibly squeeze out, too.

Casio's Tryx (EX-TR100) is far and away the most interestingly designed point-and-shoot that we've seen in years, but the compromises made to end up with a needlessly unique design continues to haunt it. The only logical benefit to the swivel-based form factor is to assist with low-level video shooting, and while the 1080p content that it logs is admittedly impressive, the paltry battery life means that you won't be shooting that way for long. If you're looking for a so-called Flip substitute now that Cisco's consumer dream has died, this would be an amazing option for $229... if it'd last for more than a couple of hours. We'd also have a far greater sense of appreciation for the design decisions if this were rechargeable via a traditional micro-USB cable, but alas, we're left with an even inferior solution: a proprietary cable and the inability to insert a secondary battery.

There's no question that the Tryx is snappy, produces reasonably great images in daylight and handles Full HD video like a champ, but until a version ships with a far more robust battery and an optical zoom, it's tough to recommend without reservations.