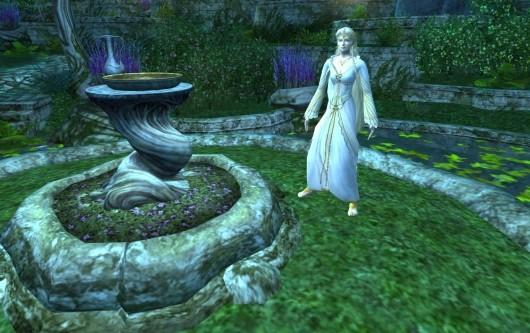 Last year, I spent a column giving my reflections, thoughts, and observations on the entirety of Volume 1 of Lord of the Rings Online's epic storyline, and today I'd like to do the same for Volume 2. Since these stories are at the center of LotRO's player experience, it's important to see how they function and hold up in today's increasingly story-centric MMO environment.

I've gone through Volume 2 twice, once before the "solofication" of the recent update and once after. The second journey was, by far, much more enjoyable since I didn't have to sit there for weeks hoping to find enough players on the same part of the Fellowship portions to continue the tale. Being able to go through it at my own pace was vastly more enjoyable, especially when I could dedicate huge chunks of time to knock out several chapters in one go.

And this is a good thing, as this volume of the epic story not only gives you one of your legendary traits but greatly helps you build reputation toward a faction that will give you another one (the Iron Garrison Guards). As such, Volume 2 will continue to be an important part of any character's journey.

So let's dig into this puppy (not... a literal puppy, you understand) and see what Volume 2 has to offer. If you haven't yet gone through this part of the epic story, beware: Here be spoilers!

I'll be honest with you: I'm not always faithful when it comes to reading quest text, even with the epic stories. Oh, sure, I try (like many of you, I suppose). But sometimes the old MMO habits kick in, and I merely want to get on with the next part of the chain without slowing down to absorb every 12-syllable Elvish word that the game throws my way.

Because of this, most of my understanding of the story came through the often-excellent in-quest scripting. I know this is a much harder thing to implement than simply typing into a text box, but man is it effective. Fortunately, quite a lot of the key moments of Volume 2's epic story take place in the quests themselves, not during the pre- and post-quest briefing.

Volume 2 kicks off with a bang as you work your way to the doors of Moria (and your first legendary items!) only to encounter the Watcher in the Water. The lead-up to the Watcher's appearance is one of the best storytelling moments in the game, as LotRO actually takes the camera away from you for an interesting cutscene. I was told by Turbine's devs that this was extremely difficult to do because of the way the game engine was designed.

Once you enter the doors, you're pulled into the wake of the Fellowship's relatively brief crossing through Moria (what took Frodo and the gang just a couple of chapters in the book will take you weeks in the game) and the attempt of the Dwarves to reclaim their former homeland. The Dwarves' ambition eventually gets them into a lot of trouble, as a quest for a powerful axe ends up backfiring most grievously. And then, per usual, you're called in to clean up their mess.

The latter three books of Volume 2 gradually transition away from Moria to focus on the Elves in Lothlorien and Mirkwood. It's here that you finally reconnect with the Fellowship of the Ring for a brief couple of chapters until you part ways once more. The final book deals with Mirkwood -- Sauron's old stomping grounds -- and how an evil threat still lingers even after he left.

Since Volume 2 was released alongside Mines of Moria (and later, Siege of Mirkwood), it shows the evolution of storytelling techniques that Turbine developed over the years. The use of skirmishes as part of the tale is a terrific way to demonstrate a few of the more action-packed moments, although I have to wonder whether these end up being difficult for players who haven't played skirmishes up to this point and have to struggle through with vastly underpowered soldiers as a result.

By far, my favorite storytelling technique has to be the use of flashbacks. Flashback stories -- usually told through session play -- are so effective that they often put the other quests to shame. Through them, we're able to experience the initial arrival of the Balrog and the final stand of the Dwarves in the infamous room that Frodo, Gandalf and the rest would eventually discover.

There's also another clever use of flashback when you go to the Elves and they ask how you escaped with Mazgog, the big bad of the Moria stories. When they first ask you this, you're likely to think, "Huh? I guess it happened between the chapters." But then the game throws you into a flashback to show just how you did it. Sure, the devs could've had you go through this earlier, but by jumbling up the timeline a little, they made it more interesting, as if you really were recounting your epic tale.

While I'm not the biggest fan of the epic stories' penchant for stunning our characters during pivotal moments so that the villains can deliver dialogue and we can feel completely helpless, there's one excellent quest in which your party is about to be defeated and you're sent back as a messenger. It went against everything I'm used to as an MMO hero, to be told to tuck my tail between my legs and run all while the enemy taunts me, but dang if it didn't lodge itself into my memory and make me want to get revenge at a later date.

Compared to Volume 1, Volume 2 is much faster and tighter as a whole, although I wouldn't say it's more memorable. I really wanted to interact more with the Fellowship than I did, and even though Turbine was able to mine a lot of material out of the few chapters of Moria that are in Lord of the Rings, at a certain point it started to feel stretched. I vastly disliked how the epic story finally sends you out of Moria to the Elves... who turn you around and send you right back into the deep dark.

I did appreciate that Turbine further examined the rift that had grown between the Elves and the Dwarves and highlighted how both sides were struggling to put aside their differences to combat the enemy. The Elves might come across as a little too perfect and powerful compared to the rash and impulsive Dwarves, but Moria certainly gave me quite a bit of sympathy for our stout friends.

Mirkwood's epic story wasn't as captivating to me as the earlier books were, and I'm not quite sure why this is. There's a heavy use of skirmishes that got a little wearing after a while, true, but it just didn't feel as imminent as the other books did. However, one of the absolute best quests takes place during this part of the story, which is when you get to see how Gandalf initially infiltrated Sauron's fortress.

I'm deeply grateful that we can solo our way through all of Volume 2 (except for a few of the epilogues, but those are pretty optional anyway), and I'm certainly not complaining about the XP and rewards that come from this chain. If you're a fan of either the Elves or Dwarves, both sides get a huge amount of story love, something I'm afraid we're not going to see as much in the future as the epic story follows the Fellowship down into Man-centric lands.

When not enjoying second breakfast and a pint of ale, Justin "Syp" Olivetti jaws about hobbits in his Lord of the Rings Online column, The Road to Mordor. You can contact him via email at justin@massively.com or through his gaming blog, Bio Break.
In this article: balrog, dwarf, dwarves, elf, elves, epic-story, featured, fellowship, fellowship-of-the-ring, flashback, flashbacks, frodo, gandalf, iron-garrison-guards, legendary-items, legendary-traits, lord-of-the-rings-online, lothlorien, lotro, mazgog, mines-of-moria, mirkwood, sauron, siege-of-mirkwood, skirmish, skirmishes, solofication, spoilers, turbine, turbine-entertainment, volume-1, volume-2, volume-i, volume-ii, watcher, watcher-in-the-water
All products recommended by Engadget are selected by our editorial team, independent of our parent company. Some of our stories include affiliate links. If you buy something through one of these links, we may earn an affiliate commission.
Share
Tweet
Share