Storyboard: The first stage of madness 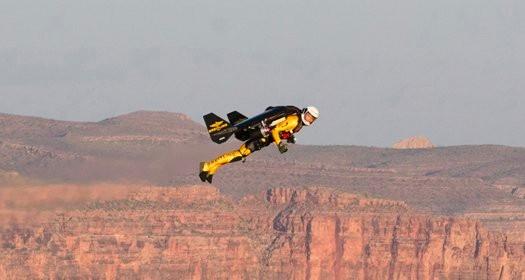 There's "crazy" and then there's "craaazy." Crazy is going swimming five minutes after eating, or wearing white after Labor Day. Craaazy, on the other hand, is Yves "Jetman" Rossy -- a Swiss flight fanatic who jetpacked across the Grand Canyon at 190-mph yesterday morning. Rossy's suicide mission began inside a helicopter hovering some 8,000 feet above the canyon's floor. After hurling himself out of the chopper, Jetman ignited his four-motor jetpack and, using his body as a rudder, gently steered himself across the abyss. The daredevil proceeded to coast for a full eight minutes at just 200 feet above the canyon ridge before he presumably realized that he was flying above the Grand Canyon and decided to parachute down to the bottom. Rossy completed the flight with his physical health fully intact, though his mental condition remains up for debate. Blast past the break for a video that'll throw your acrophobia into overdrive.

In this article: crazy, daredevil, flight, Grand Canyon, GrandCanyon, helicopter, JetPack, motor, parachute, speed, stunt, swiss, video, wings, Yves Rossy, YvesRossy
All products recommended by Engadget are selected by our editorial team, independent of our parent company. Some of our stories include affiliate links. If you buy something through one of these links, we may earn an affiliate commission.
Share
Tweet
Share