Kyocera DuraPlus: a Sprint phone so masculine it'll kick your face in for misdialing 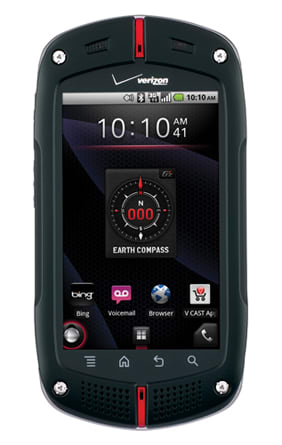 For years, construction workers, thrill-seekers, and everyone else unfettered by cubicle walls have had rubberized, rugged handsets to keep them company on the road. Until fairly recently, though, the price of durability has been settling for a dumbphone. And frankly, the selection of toughened-up smartphones remains pretty sparse today. Casio's G'zOne Commando ($199 on contract) isn't the first quasi-invincible Android device, but it is the first to be sold on Verizon's network. As expensive as a flagship handset, the Commando offers military-grade resilience against drops, water, extreme cold, and other elements. But is it capable enough for everything else? Let's find out. How would you rate the G&#039;zOne Commando?
We want to hear what you think. Post a quick review now to join the conversation!
Write a review

With a name like "Commando," would it really surprise you to learn this is one macho handset? Particularly compared to the Motorola Defy, a phone compact enough that you could mistake it for a garden-variety Android device, the Commando has an aggressively industrial aesthetic that combines rubberized surfaces, red accents, and loads of exposed screws. And yet, for such a tough device, there's something oddly toy-like about it. That's mostly because its sides are lined in plastic -- a material that also makes this handset lighter than you'd expect.

In part, though, it's the small screen that makes the Commando look like a less-than-serious phone. Given its heft (5.1 x 2.6 x 0.6 inches), it's hard not to feel that Casio squandered some precious space. For a phone this imposing, the capacitive screen is surprisingly modest at 3.6 inches, and it's more cumbersome to hold than, say, Samsung's Infuse 4G, which boasts a whopping 4.5-inch display. Next to our Motorola Droid's screen, the Commando's 480 x 800 screen is brighter and more vibrant, though at times the touchscreen -- encased in 1-mm-thick Gorilla Glass -- can be vexing to use. After about a week of testing, we realized that we had subtly adapted our behavior, and learned to apply extra pressure while swiping and tapping objects. As it turns out, without that extra pressure you'll have some irritating (and fairly frequent) moments where you flick the screen and nothing happens.

Taking a tour around the body, you'll find a covered 3.5mm headphone jack and a MicroUSB port, along with a volume rocker, programmable key, camera launcher, and power button. The port covers are easy to lift, particularly if you can wedge a fingernail under there. And though they stay put, these details, too, also make the phone feel deceptively less solid than it is. Removing the back cover, is also easy: just flip a lever to the unlock position and scrape the lid off. To re-secure it, just press the seven dots printed on the battery cover and slide the lever back into the lock position. Pressing those spots and hearing the lid make a satisfying click is one of the high points in the user experience, at least where tactility is concerned.

Although sound from the two front-facing speakers was loud, phone calls sounded weak on our end. Ironically, we had a difficult time hearing our callers while chatting outdoors. Even when we retreated inside, though, we still had to crank the volume to make out what our friends were saying. But while the call quality isn't exactly befitting of an outdoorsy phone, the 1460mAH battery is well-suited to the challenge of lasting through a day in the rough. The phone's rated for 7.5 hours of use, and actually, we still had juice to spare after a full business day of obsessively checking email and Twitter, looking up directions in Google Maps, and playing Angry Birds during our commute and long wait at the doctor's office. If you were already in the market for a durable phone, this is the single best reason to consider the Commando. Sure, the Defy has stellar longevity, too, but with the Commando you won't have to wait long to start using it after you start recharging your dead battery.

The Commando meets the military's 801G specifications for water, dust, shock, salt fog, vibration, solar radiation, and temperature extremes. If you were expecting to see a stunt video of us running the phone over with a cement truck, well, we hate to disappoint you, but the phone's durability is more appropriate for protecting it from mundane clumsiness. As an 810G-certified handset, the Commando can survive immersion in meter-deep (3.3-foot) water for up to 30 minutes, a series of 26 four-foot drops, and temperatures between -25 and 85 degrees Celcius (-13 to 185 degrees Farenheit).

In short, it works as advertised. The phone's performance remained unchanged after we left it in our freezer for half an hour and left it submerged in water for the same period of time. And though we stopped short of throwing it out of our fifth-floor office window, we weren't able to scratch the display during our week with it.

The Commando runs Android 2.2. (Froyo), though out of the box, at least, it feels like a crippled version of the OS. Verizon made Bing the default search engine, though you can always add a Google search widget to one of the five home screens (and, you know, trash the Bing one if you so choose). It also replaced the stock Gmail app with a proprietary mail application that syncs with Gmail accounts, along with Yahoo Mail, Hotmail, AOL, Exchange, and Verizon.net addresses. That variety's nice, but the app just isn't as well designed as the standard one -- it doesn't group messages in conversations, and you have to press a soft key to get to any reply or forwarding options.

One thing you can't recover is the stock Android keyboard. Unlike other Android handsets, which list it as an option even if Swype or another third-party option is the default, the Commando gives you one choice: the XT9 / T9 Trace. Fortunately, it's a pretty darn good one. Essentially, it does the same thing as Swype, letting you trace out the word on the virtual keyboard without taking your finger off. (Of course, you can peck at each letter, too, which works smoothly.) The traceable keyboard is accurate, though be warned that there is a learning curve. You have to be precise about where you put your finger, and make sure you linger on a letter before gliding on to the next. As with Swype though, the word prediction isn't all that smart. For instance, in the photo above you can see that when we typed "helo" by mistake, "hello" wasn't among the top suggestions. Similarly, if you get the first letter of a word wrong (say, "b" instead of "v"), spellcheck won't offer words starting with "v," even if you spell the rest of the word correctly. With this keyboard, at least, the suggestions are listed in a horizontal panel sitting just above the keyboard -- a much less intrusive approach than Swype's predictive spelling, which pops up in the center of the screen.

The Commando also takes liberties with the home screen (the default of five, that is), adding a flip-out menu of shortcuts for contacts, email, messaging, voice control, and the calendar app. To be honest, we didn't find much use for this, since we're fans of loading our primary home screen with shortcuts for the apps we use the most.

Being a rugged phone and all, Casio also bundled a handful of home-brewed apps geared toward outdoorsy type, including a compass, pedometer, star gazer, runner's training companion, thermometer, so-called Trip Memory, sunrise / sunset tracker, and another that keeps tabs on the tides. Although you can install widgets for these, you can also find them inside the main G'zgear app. Of the bunch, the only one we found ourselves using repeatedly was the thermometer, which reports both city and room temperatures. All in all, the suite is gimmicky in the way Puma phone was, but at least it's easy to ignore these extraneous applications if you're so inclined.

The ironic thing about the Commando's 5 megapixel camera is that the only way to get decent shots is to call a time-out in your active lifestyle. It's not enough to stop walking and try your darndest to keep your hands still -- you also have to stay frozen for a few seconds after you tap the shutter button. In the case of the below photo, for instance, we paused briefly to snap some foliage, and continued on our merry way. Only later did we realize we hadn't lingered long enough to get a clean shot of the greenery.

Occasionally, when we concentrated hard enough, we walked away with a crisp picture.

As for quality, the color reproduction is fairly accurate, though the camera still stumbles in a wide range of shooting scenarios, from harsh backlighting to close-up photography. Meanwhile, our video looks like a stop-motion movie, with people and cars chugging along at a far more sluggish speed than in real life.

Casio's G'zOne Commando earns its stripes with its brawny design, which resists scratches, falls, spills, and stints in the freezer as promised. But what it boasts in battery life and sheer fortitude, it lacks in call quality, core Google apps, and a responsive touch experience. In a sense, we can't knock the slightly poky display too much. The Commando is a fine, if not good, phone for what it is. After all, if you're buying this, it's because you crave durability first, and not because you're a benchmark junkie. Still, we'd be remiss if we didn't point out that the Motorola Defy also offers impressive battery life -- along with a more discreet design (and, to be fair... Motoblur). If you can tolerate -- or even learn to love -- the Commando's cheesy man's man design and are willing to download core Google apps manually, you shouldn't get too hung up on the rest of those niggles in our cons list.
In this article: 810G, Android 2.2, Android2.2, casio, casio commando, Casio gZone Commando, CasioCommando, CasioGzoneCommando, commando, durable, Froyo, froyo update, FroyoUpdate, Google, mil-spec, milspec, milspec 810G, Milspec810g, mobile, review, rugged, rugged phone, RuggedPhone, verizon iphone, VerizonIphone, vista
All products recommended by Engadget are selected by our editorial team, independent of our parent company. Some of our stories include affiliate links. If you buy something through one of these links, we may earn an affiliate commission.
Share
Tweet
Share