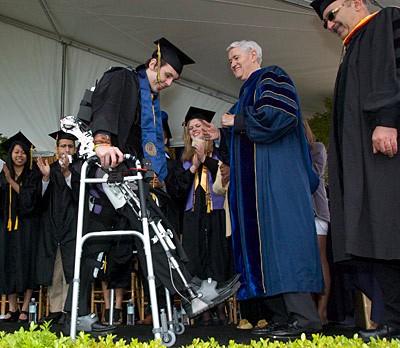 Austin Whitney hasn't been able to walk since a 2007 car crash left him paralyzed, but on Saturday the 22-year-old triumphantly strode across the stage to accept his degree from UC Berkeley. He had a little help, in the form of a specially crafted robotic exoskeleton developed by Berkeley engineering professor Homayoon Kazerooni. Kazerooni and his team designed the exoskeleton with lightness and affordability in mind, resisting the urge to load it up with expensive hardware and tethering the mechanized walker to a backpack that houses a computer and a rechargeable, eight-hour battery. As a result, the Austin walker won't enable the kind of acrobatic leaps that would make Lt. Rasczak proud, but its reduced mobility comes at a reduced cost of just $15,000. That's certainly not an impulse buy, though it's a welcomed alternative to other exoskeletons that retail for $100,000 or more. Walk past the break for a video of Whitney's momentous steps, along with a clip of Kazerooni describing his creation.