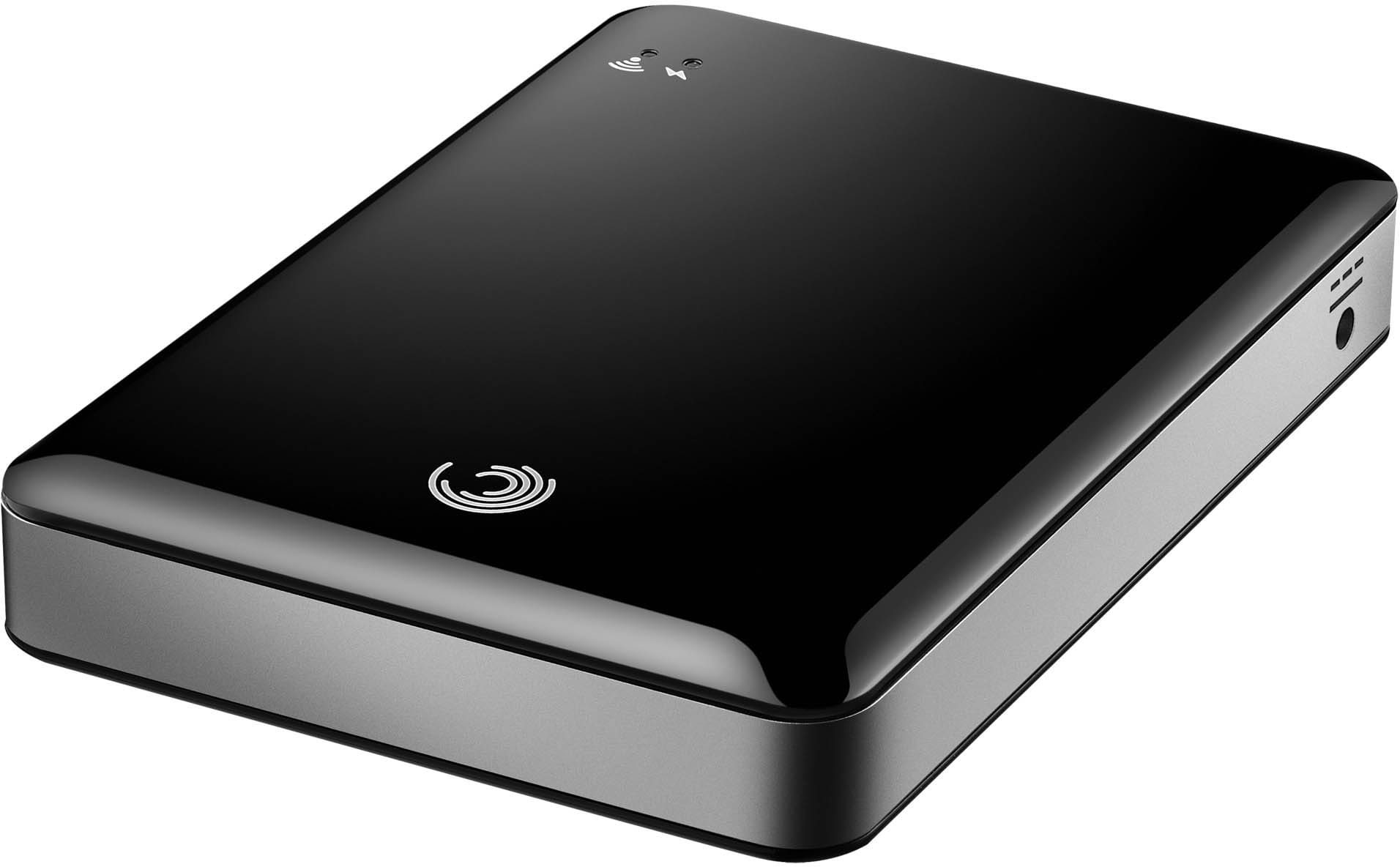 Seagate just took the wraps off what's likely the niftiest portable HDD to cross our path in a long, long while. The GoFlex Satellite is part storage device, part wireless media streamer, and it manages to wear both hats with little compromise on either end. For all intents and purposes, this is a standard 500GB GoFlex HDD with a bit of extra girth, an AC input, an 802.11b/g/n WiFi module and a built-in web server. The reason for those extras? A simple depression of the on / off button starts the streamer up, and it's ready for a connection in around 30 to 40 seconds. Once fired up you can stream data to just about anything -- even iOS devices. That's an impressive feat, not quite a "first" moment as Seagate would like you to believe (we'll give that crown to AirStash), but still a rarity.

Our unit shipped with a GoFlex USB 3.0 adapter and a car charger, with the latter enabling users to entertain their children on long road trips -- a nice addition, we have to say. Installation is a cinch; just fire up a media sync application that resides on the drive (for OS X users, anyway), and you're ready to drag and drop files as if it's any 'ole HDD. No media management software or anything of the sort, thankfully. The purpose of having your media onboard is to stream videos, photos, documents and music to your iPad, iPhone, iPod touch, or any other tablet, phone or laptop with WiFi. You heard right -- while there's only a dedicated app for the iOS family, any WiFi-enabled device with a web browser can tap into this. Care to hear our take on this $200 do-it-all hard drive? Have a look at our review video just after the break.

How would you rate the GoFlex Satellite?
We want to hear what you think. Post a quick review now to join the conversation!
Write a review

The drive itself -- while patently gigantic compared to the GoFlex Slim -- is still highly portable, and it's way easier to lug around than any other media streamer we've seen. It's also just $199.99, which tends to be the going rate for higher-end streamers with half a terabyte of storage baked in. Only this one, of course, packs a built-in battery and could easily slide into your front rear pocket. We were immediately struck by just how easy file transfer were -- we anticipated having to deal with yet another piece of kludgy software in order to get our tunes and videos over to the HDD, but it truly acts like a standard hard drive. Just drag files over and organize however you want, and the app / web server sorts it accordingly.

The iOS app (there's an iPad version and a separate iPhone / iPod touch version) is relatively spartan, but certainly gets the job done. There's a handful of categories and view options, but the Folder View seemed to be the most sophisticated. That's the only one that actually gave us a view to our music in actual folders, so you'll likely end up spending the most of your sorting time there. We're thrilled to report that the app is both quick and accurate, and during our testing we had no issues getting it to pull content; better still, it'll stream to three different devices at once. Unfortunately, the Photos pane doesn't support scrolling through images, but we're hoping that Seagate throws that in on a future build.

Naturally, things work best on an iOS device, but any tablet / handheld / computer with a WiFi module and a web browser can theoretically take advantage. We connected through the mobile Safari browser as well as the browser on our Nexus One (Android 2.3), and while the former gave nearly the same experience as the app (albeit with slightly longer loading times), the latter had one particular pain point. Viewing photos and listening to music on Android's browser was a cinch, but viewing videos... no so much. Our phone kept trying to download entire videos rather than streaming them, so we'd caution non-iOS users to expect some limitations if you buy in.

Is the GoFlex Satellite worth its weight in gold? Depends. If you're an avid iOS user, you need some extra storage space anyway, and you'd rather house all of your media on a 500GB external drive than on the device itself, Seagate's latest concoction is a total must-have. It works well, and the built-in battery is capable of streaming for four to five hours on a charge. It's hardly the most robust media streamer on the market, but it's also one-of-a-kind. For those who tend to roll with other operating systems, we'd probably hold out until the company (hopefully!) adds dedicated Android / Windows Phone 7 / etc. apps -- and who knows, by that time you may be getting a 1TB model for the same scratch.
Show full PR text

SCOTTS VALLEY, Calif. - May 16, 2011 -Seagate (NASDAQ: STX), today announced GoFlex Satellite™ mobile wireless storage, the first battery-powered external hard drive to wirelessly extend the storage capacity of any Wi-Fi enabled mobile device. With 500GB and Wi-Fi access over 802.11 b/g/n and a rechargeable battery, this latest member of the GoFlex® family provides the ability to carry an entire library of video, music, pictures and documents with you. Devices are wirelessly connected directly to the GoFlex Satellite drive by use of the free GoFlex Media™ app-available now on iTunes and the Apple App Store-or a web browser. GoFlex Satellite is available immediately for preorders from Seagate.com, Amazon and BestBuy.com for a manufacturer's suggested retail price of $199.99, and is scheduled to arrive in Best Buy stores in July. Global availability is planned for later this summer.
"With the growth of the tablet and iPad markets and the larger volumes of high-quality media now being consumed, there is a clear need for access to content that is not plagued with the challenges of streamed video over the Internet," said Patrick Connolly, vice president and general manager of Seagate's retail group. "The unfortunate fact is that these popular new mobile devices are hampered by their limited storage capacity while one of their primary functions is that of media consumption.

"With the GoFlex Satellite mobile wireless storage, we wished to create an elegant solution that provides real value to the multitude of iPad users out there by delivering a seamless connection to local storage. No longer will a consumer feel as though it is a compromise to purchase a lower capacity tablet or iPad. With GoFlex Satellite, people will be able to carry their entire media library with them without the need for wires or the web at a fraction of the cost of adding 3G or purchasing the 64GB iPad."

Streaming over the Internet has enabled video access for tablet owners, but the quality is at the mercy of the Internet connection, be it over Wi-Fi or 3G/4G. With more connected devices per hotspot, it's often difficult to watch video without choppiness or pixilation. Rather than rely on a buffered stream from a distant provider, GoFlex Satellite mobile storage wirelessly serves up media content as a local attached storage for up to three devices at the same time. With a stand-by battery life of up to 25 hours, the powerful lithium-polymer battery delivers up to 5 hours of continuously streaming video. To help with extending battery life, the free GoFlex Media™ app provides a progressive download feature, which temporarily loads the video on to the iOS device it is being streamed to.

GoFlex Media™ App
Initially available for Apple iOS devices, such as: iPad, iPhone and iPod touch; the GoFlex Media app provides a seamless way to connect the mobile wireless storage to your iPad or iPhone. The Android app is expected to be available by this summer. Those that currently use an Android smartphone or tablet can access content on a GoFlex Satellite device through its browser.

Media Sync software
The easy-to-use Media Sync software, also included free with purchase, makes grabbing media from a Windows® PC or Mac® OS X computer a breeze. Wherever the files are stored, whether that is a file structure of your own creation or in an iTunes library, the Media Sync software will load all of your desired music, videos, photos and documents on to the GoFlex Satellite drive. Media Sync is easily configured to only place files on the drive that are compatible with your iOS device. Even music and videos purchased through iTunes can be loaded to the GoFlex Satellite drive and will play on all authorized devices.