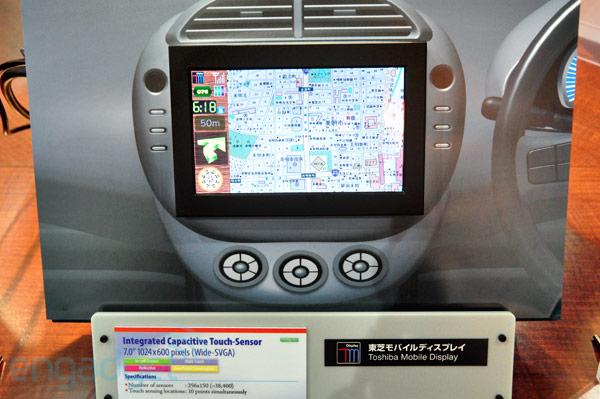 Samsung's Super AMOLED may have beat Toshiba to the in-cell capacitive touch punch, but we're still happy to see other LCD panels dropping unnecessary layers. Featured in a GPS mock-up, Toshiba's 7-inch 1024 x 600 R&D display touts 10-point multi-touch over 38,400 sensors -- that's one touch sensor for every four pixels. It may not be the first LCD to abandon the standard touch layer for integrated capacitive support, but we wouldn't shy away from a tablet or embedded screen featuring this 1mm wonder. We'll have to wait though; Toshiba's in-cell tech is still in R&D, with no word when or if we might see it in commercial devices. Check out the video after the break for a quick hands-on.

In this article: capacitive, display, hands-on, in-cell, In-cell-Touch, integrated, lcd, monitor, multi touch, multitouch, research and development, ResearchAndDevelopment, samsung, screen, SID, SID 2011, Sid2011, slim, tft, TFT LCD, TftLcd, thin, toshiba, toshiba mobile display, ToshibaMobileDisplay, touch, touchscreen, video
All products recommended by Engadget are selected by our editorial team, independent of our parent company. Some of our stories include affiliate links. If you buy something through one of these links, we may earn an affiliate commission.
Share
Tweet
Share