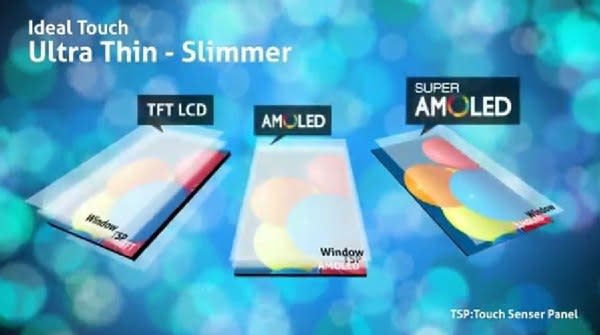 Using "super" to describe your new display technology just begs for criticism. Especially when the word is affixed to a handheld display technology as notoriously difficult (if near impossible) to see in direct sunlight as OLED. Fortunately, Samsung's Super AMOLED appears to have licked the outdoor readability issue while bettering the features that made us fall in love with AMOLEDs in the first place. First off, it's thinner since the touch sensors are now integrated into the display; colors are more vivid due to the removal of the obfuscating touch sensor layer that sits on top of TFT LCD and traditional AMOLED touchscreen displays; and even the viewing angle has been improved. You won't find a soundtrack in the video posted after the break because the technology is already booming enough.

In this article: amoled, display, oled, samsung, super amoled, SuperAmoled, touchscreen, tsp
All products recommended by Engadget are selected by our editorial team, independent of our parent company. Some of our stories include affiliate links. If you buy something through one of these links, we may earn an affiliate commission.
Share
Tweet
Share