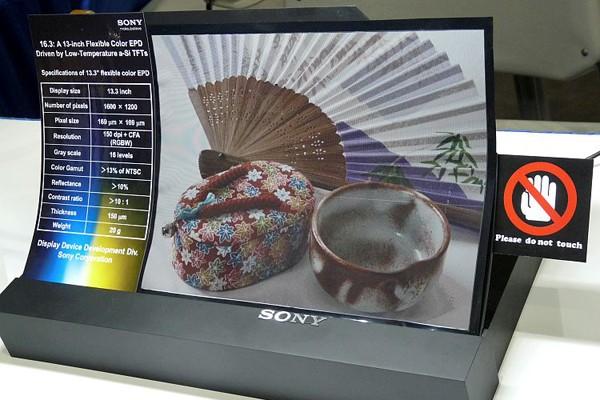 We saw some fancy panels and flashy lights on the show floor at SID this week, but Sony decided to keep its latest display offerings tucked away in an academic meeting. We're getting word today from Tech-On! that the outfit unveiled a 13.3-inch sheet of flexible color e-paper as well as two new glasses-free 3D panels in a separate session at the conference. New e-paper solutions loomed large at SID, but we were surprised by the lack of flexible screens. Sony's managed to deliver both on a display that weighs only 20 grams and measures a mere 150-microns thick, a feat made possible by the use of a plastic substrate. The sheet boasts a 13-percent color gamut, 10:1 contrast ratio, and 150dpi resolution.

As for the 3D LCD displays, Sony joined a slew of other manufacturers in showing off its special brand of the panels. These new displays, ranging from 10-inches to 23-inches, apparently employ a new method for delivering 3D to the naked eye. This particular method uses a backlight positioned between an LCD panel and another backlight for 2D images, and can be easily be switched off for 2D viewing. Of course we would have liked to see these screens in the flesh, but alas, Sony decided to play coy. Hop on past the break for a shot of the new 3D panel.