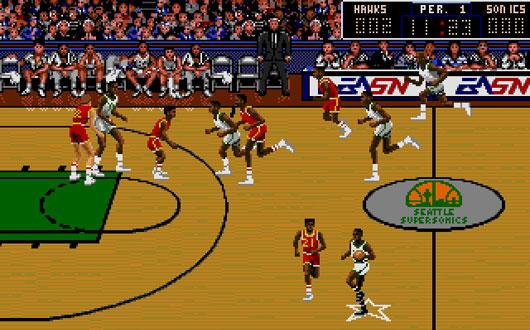 Six years ago, the NBA counted five major game makers -- including Sony, Midway and Atari -- in its non-exclusive circle of licensees. That number has since dwindled to two, as the league today re-upped its multi-year licensing agreements with its longstanding (and still standing) video game partners, Take-Two Interactive and Electronic Arts.

Unsurprisingly, through its 2K Sports label, Take-Two will continue to make use of its NBA license in its successful NBA 2K franchise. The most recent release, NBA 2K11, has now sold more than five million units since its October 2010 debut, according to the publisher. The next iteration, NBA 2K12, is expected to be announced at E3.

Assuming 2K12 is on track to be released this fall (lockout or game on), it would mark a second straight year that 2K Sports' simulation series entered the market with no direct competition (Madden style!). EA, the NBA's oldest video game partner, permanently benched NBA Elite 11 last November after the company determined, "It was just going to be a bad game." EA Sports' next basketball sim won't be released until Fall 2012, with a download-only NBA Jam sequel subbing in this October.

Additionally, Take-Two is expected to "explore and develop new NBA licensed gaming opportunities, including online on social media platforms," according to a press announcement.

Counting itself as "the No. 1 U.S. sports league on Facebook, Twitter, and YouTube," the NBA, through its NBA Digital label, has already released NBA Legends (developed by Lionside) and NBA Dynasty (in partnership with Disney-owned Playdom) on Facebook this year.

The new agreements will provide fans with a diverse offering of NBA video games, including 5-on-5 simulation and arcade style games that will be available on video game consoles, online, and through mobile devices.

"We have had successful and longstanding relationships with both 2K Sports and EA SPORTS," said Sal LaRocca, Executive Vice President of NBA Global Merchandising. "Extending our agreements with the top sports video game developers continues to maximize our presence in this category, while ensuring our fans the best selection of NBA video games."

Take-Two and EA will each have the rights to use NBA teams and players in their NBA video game titles. Throughout the agreements, the league will work closely with Take-Two and EA to promote the basketball video games through global marketing, promotional programs, and multiple assets including NBA TV, NBA.com, and grassroots events.


Take-Two
Take-Two, an NBA licensee since 1999 and with the new agreement, an official marketing partner of the NBA, will continue to publish the NBA 2K franchise through its 2K Sports publishing label. NBA 2K, a 5-on-5 simulation which originally debuted in 1999, will be released on a yearly basis on all leading video game platforms.

This year, NBA 2K 11 which features Michael Jordan on the cover, has sold more than five million units to date, a record for the NBA 2K franchise.

"We're pleased to extend our successful relationship with the NBA, that will allow 2K Sports to continue to innovate the basketball video game category with our critically acclaimed NBA 2K franchise, said Jason Argent, vice president of marketing for 2K Sports. "Our partnership ensures that we can continue to marry innovative gameplay with the authenticity of the NBA that today's sports fans demand."

Along with the acclaimed NBA 2K franchise, 2K Sports will have the opportunity to explore and develop new NBA licensed gaming opportunities, including online on social media platforms.


Electronic Arts
EA, an NBA licensee since 1991, will debut a new 5-on-5 NBA simulation title in fall 2012. The game is being developed at EA Tiburon in Orlando. EA SPORTS originally unveiled their simulation game, NBA LIVE in 1995.

Along with a new simulation game, EA will continue to publish their arcade-style video game franchise EA SPORTS NBA JAM. The latest edition, NBA JAM: On Fire Edition is being developed for the PlayStation®3 computer entertainment system and Xbox 360® videogame and entertainment system, and it will be available on PlayStation® Network and Xbox LIVE® Arcade this fall. EA SPORTS revived NBA JAM, the popular arcade game from the early 1990's, in October 2010.

"We're pleased to continue our longstanding partnership with the NBA," said Jordan Edelstein, Vice President of Marketing, EA SPORTS. "With our all-new digital download of NBA JAM coming this fall and a new simulation title in development for release next year, we have a strong lineup of innovative NBA titles coming soon from EA SPORTS."


About the NBA
The NBA, founded in 1946, is a professional sports league and global business that features 30 teams in the United States and Canada. During the 2010-11 season, NBA games will reach 215 countries and territories in more than 40 languages. Official NBA rosters currently feature 85 players from 41 countries and territories. NBA merchandise is sold in more than 125,000 stores in 100 countries on six continents. NBA.com averages more than 26 million page views per day, with more than 50 percent of the site's visitors coming from outside of North America. The NBA is the No. 1 U.S. sports league on Facebook, Twitter, and YouTube, with the most fans, followers, and videos viewed on each, respectively. Through NBA Cares, the league, its teams and players have donated more than $160 million to charity, completed more than 1.7 million hours of hands-on community service, and created more than 605 places where kids and families can live, learn, or play.
# # #
In this article: 2k-sports, basketball, ea, ea-sports, license, licensing, nba, nba-2k10, nba-2k11, nba-2k12, nba-digital, nba-dynasty, nba-jam-on-fire-edition, nba-legends, sales, social-games, take-two
All products recommended by Engadget are selected by our editorial team, independent of our parent company. Some of our stories include affiliate links. If you buy something through one of these links, we may earn an affiliate commission.