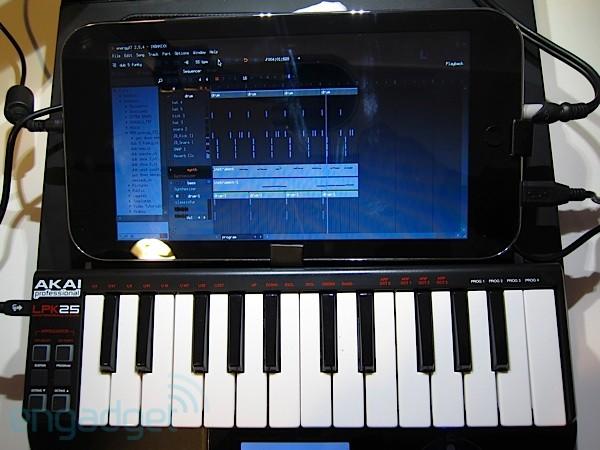 So the MeeGo Conference is winding down here in San Francisco and we have prowled the exhibitor area over the past couple of days to bring you a taste of what's stimulated our eyes and ears at the event so far. We got to play with the Indamixx 2 music tablet -- basically an iiView M1Touch Pine Trail tablet running an audio-optimized build of MeeGoo 1.2 Tablet UX, which features a customized kernel for more real-time control and better audio scheduling. It's expected to ship for $700 in "June or July" complete with DAW and DJ apps.

Next we came across a MeeGo-based in-vehicle entertainment system that's currently available in cars from Chinese manufacturer Hawtai Motor. The device is Atom-powered, includes 3G connectivity, and provides navigation, communication, audio / video playback (for both stored and streamed content), along with Internet access. We saw a MeeGo app that gathers contact information on a form, sends it to an NFC-equipped Nokia C7, and writes it to a blank RFID tag. The tag can then be read by any NFC-capable phone, such as Google's Nexus S.

A fun conference isn't complete without some games, and we were treated to a homebrew, QML-based Dance Dance Revolution clone running on MeeGo, written using just a few hundred lines of code. Speaking of QML, we got a demo of another in-vehicle entertainment system with built-in instrumentation. This MeeGo app was designed to interface with a MegaSquirt open source ECU and display engine and other car data on a set of virtual gauges -- this in addition to performing the usual audio and navigation tasks. Check out our gallery below, then grab a snack and hit the break for our 15-minute hands-on video.