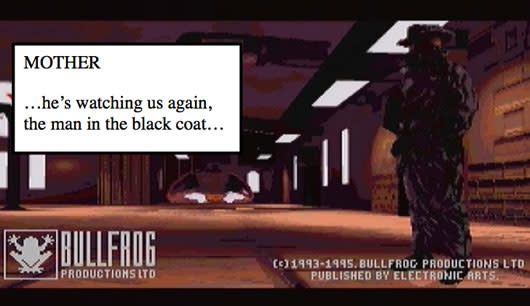 Siliconera has published alleged "chunks" of a script for Starbreeze's long-rumored Syndicate game. If authentic, the excerpts would join some trademarks in a modest pile of evidence pointing to a reboot of EA's dormant cyberpunk series, created by the now defunct Bullfrog Productions in the early 90s.

The narrative and dialog excerpts share some commonalities with the old Syndicate games' bleak, corporate cyborg–regulated world -- namely, the suggestion of brain-implanted "chips" -- but don't otherwise let on to any gameplay elements.

In June 2009, Sean Cooper, who designed the original, isometric tactical shooter, commented on EA's failed attempts to revive the franchise. "Every time I've seen a prototype of a new Syndicate it's just been misguided," he told IncGamers. Cooper did not appear to have any knowledge of Starbreeze's possible recreation, which is rumored to have been in development since August 2007.

[Screenshot source: MobyGames (with script overlay)]
In this article: ea, project-redlime, script, starbreeze, starbreeze-studios, syndicate
All products recommended by Engadget are selected by our editorial team, independent of our parent company. Some of our stories include affiliate links. If you buy something through one of these links, we may earn an affiliate commission.
Share
Tweet
Share