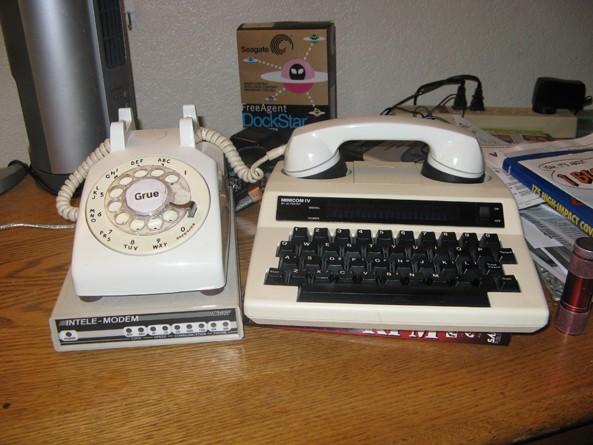 In today's episode of "But will it run Zork?" a chap named Ulysses got the vintage game to run on a TDD (telecommunications device for the deaf) -- a project he built to show off at the Bay Area Maker Faire last weekend. In a move we truly respect, he hunted down a rotary phone lifted straight out of the era when Zork was conceived (that would be the late '70s / early '80s). Then, he modified a modem so that the acoustically coupled TDD could be interfaced -- transmitting at a slow 45.5 baud to make it easy for even ponderous readers to keep up, one line at a time on the TDD's narrow display. Once this was sorted, things weren't exactly smooth sailing when Ulysses started fitting the compressed Zork story file into the system. At first, he tried using an Arduino Pro and an Arduino Mega, but found that neither had enough memory to accommodate the compressed Zork story file. Ultimately, he took a different tack and settled on an embeddable FitPC. We'd love nothing more than to see this thing in action, but in lieu of a video we highly suggest carving out a few minutes and perusing Ulysses' photo blog at the source link.
In this article: Arduino, Arduino Mega, Arduino Pro, ArduinoMega, ArduinoPro, Bay Area Maker Faire, BayAreaMakerFaire, deaf, DIY, FitPc, game, hack, hard of hearing, HardOfHearing, Maker Faire, MakerFaire, mod, retro, rotary phone, RotaryPhone, TDD, telephone, Zork
All products recommended by Engadget are selected by our editorial team, independent of our parent company. Some of our stories include affiliate links. If you buy something through one of these links, we may earn an affiliate commission.
Share
Tweet
Share