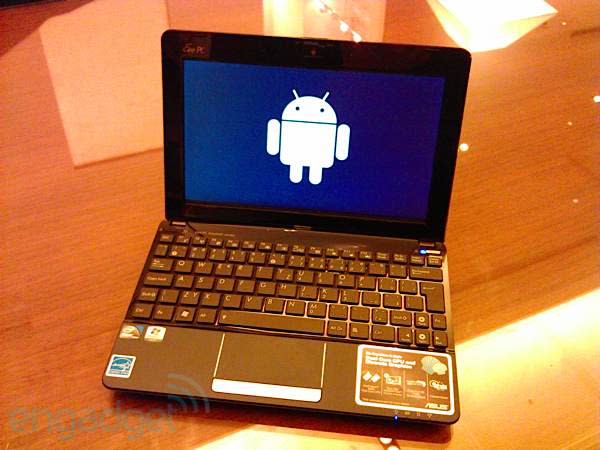 It's not the first time we're run into CUPP Computing's unique ability to blend the x86 and ARM platforms into one device -- at least in prototype form -- and just before the start of Computex 2011 here in Taipei we got a chance to experience the company's latest iteration called PunkThis. The product is meant to replace your computer's 2.5-inch SATA hard drive with a board featuring a complete ARM-based system along with a mini-PCIe socket -- the latter capable of accommodating a physically smaller SATA SSD to handle the missing storage for the x86 host. PunkThis is built around a Texas Instruments DM3730 1GHz ARM CPU with 512 MB of RAM and includes a WiFi radio, as well as connectors and cables to interface the board with existing video, audio, and USB facilities on the host computer (no soldering required).

The Asus Eee PC netbook we got to play with was running Android 2.3 (Gingerbread) but was lacking WiFi support. It ran perfectly alongside Windows 7 which was powered by the existing Atom processor. Switching OS-es is just a hotkey away, and battery life is supposedly doubled when the main x86 CPU is shut down and the only the daughter board is operational. PunkThis also provides two microSD card slots -- one for system storage used by the ARM-based OS (Android in this case), the other for mass storage visible to both environments (shared space). Pricing is supposed to remain below $200 and availability is expected in 8 weeks. That's pretty hardcore, but with a name like PunkThis would you expect anything less? Feast your eyes on our gallery and peek after the break for our hands-on video along with the obligatory PR.

CUPP Computing has developed a 2.5" module for x-86 PCs. Codenamed "PunkThis" for PC, it is based on CUPP's patented technology and "Multi-mode computing" vision. The device enables a user to combine a high performance PC processor (x86/IA) and a low power processor (RISC/ARM) into a single platform. This allows the user to choose between low power/extended battery life and high performance/ normal battery life, enhancing their PCs functionality.

PunkThis enables more practical computing with greater battery life and a more versatile set of use cases. It allows low power applications and flexibility, with seamless access to PC processing power as needed. This module will provide over 20 hour computing in a standard netbook or 40 hours with a low power screen. (PixelQi)

The PunkThis module fits in a standard 2.5" drive bay and contains both and Mini PCIe SSD HD and an ARM processor. The ARM Processor is a TI OMAP DM3730 at 1GHz with 512MB of RAM. It is designed to be an unlocked system to allow users to modify the OS and functionality. Two USB connections (Host & USB OTG) allow uses flexibility to access and share data.

The PunkThis board will have wiring kits that allow solder-less in installation into a number of PC platforms. The Asus 1015PN is the first target for these packages. (Additional platforms will follow.)

The PunkThis desktop enclosure will give users and developers a compact desktop Computer that can be used in a number of roles. As a stand-alone computer it can be used as media center, terminal, or connected device. When used in conjunction with a desktop PunkThis provides an ideal instant on, low power system to check mail and surf the web. Developers gain the ability to target the ARM v7 code base on physical hardware while retaining the functionality of a desktop environment.

PunkThis is an open unlocked device allowing users and developers to use their imagination to find new use cases and functions for this board. This gives manufacturers and consumers the ability to easily adapt existing PC's for greater power efficiency and flexibility. Delivering functionality previously impossible in a Personal Computer.