Z. Honig
May 31st, 2011
In this article: apple, apple ipad, AppleIpad, arcade, arcade cabinet, ArcadeCabinet, atari, bluetooth, cabinet, case, enclosure, for sale, ForSale, gaming, icade, ion, ipad, joystick, old school, OldSchool, on sale, OnSale, pre-order, pre-orders, retro, review, tablet, thinkgeek
The iCade Arcade Cabinet began as an April Fool's joke in 2010, but this golden unicorn of iPad accessories has actually made it to production, showing up at our door last week. iCade creator ThinkGeek partnered with Ion to make this former imaginary gadget a reality, and so far it appears to be a hit, backordered for weeks soon after hitting the online store in April. The $100 cabinet pairs with your iPad or iPad 2 over bluetooth, bringing familiar hardware arcade controls to the Atari's Greatest Hits app, which includes classics like Missile Command (free), and Pong, which you can download from within the free Atari app for $1. The iCade is an awesome addition to your gaming collection, but it won't replace the hours of coin-dropping at your local arcade. Read on to find out why this accessory may become a permanent fixture on our desk.
%Gallery-124649%
Ion Audio
0
SCORE
Engadget
N/A
Critics
6 reviews
70
Users
3 reviews
87 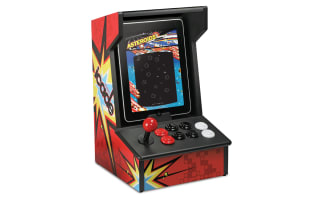 With a footprint roughly as high and wide as two iPads stacked horizontally, the iCade is compact enough to sit comfortably on a tabletop. It's almost more functional as a piece of art than an iPad game controller, but the joystick and eight arcade-style buttons certainly attracted some nostalgic Atari fans when we had it sitting out in the open in the office. The cabinet requires minor assembly -- shipping in five pieces, along with screws and an allen wrench -- but if you can throw together a particle board IKEA EXPEDIT desk you shouldn't have a problem here. The iCade looks remarkably similar to the April Fools mock-up, with an identical joystick and similar false coin slot, though the final version adds six arcade buttons and nixes the single/multi-player buttons on the front.

We were up and running within 15 minutes of opening the box, including assembly, pairing over Bluetooth, and downloading Atari's Greatest Hits, which includes 100 classic Atari games that work with the iCade's Bluetooth controls. Powered by a pair of AA batteries, the controller is completely wireless, though you can feed your dock connector cable through the bottom and out to your own power source, charging your iPad as you spend hours defending the world from a dozen pixelated missiles. We didn't wear down the included batteries down during a couple days of casual use, but you can also add an AC adapter, just in case you find yourself flying through AA's while obliterating Asteroids.

The iCade connects to your iPad over Bluetooth, and the joystick and buttons pull double duty here, representing specific passcode numbers during that rather seamless process. After pairing your iPad, you can wake up your device and get back to gaming whenever you want simply by tapping the joystick or other controls. We launched other portrait-oriented games, but it only appears to work with the Atari app. We also tried pairing with a Nexus S 4G, but that didn't work, likely because Android required the passcode to be entered on the handset, and there isn't one provided with the iCade (and no, none of the default passcodes worked).

Chances are you won't be rocking out to Aerosmith while gaming at home, so you'll definitely notice the audible click each time you tap on a button -- which can be fairly often, depending on the game. There appears to be a gratuitous number of arcade buttons, since you'll only use two to five of the included eight, except when typing in your Bluetooth passcode. The control layout varies slightly depending on the game, but activating pause mode displays a layout on-screen, with the iPad indicating input mapping as you move around the arcade buttons. The joystick also isn't as smooth as seasoned arcade gamers would expect, activating four clearly defined buttons rather than gliding on an axis, but for a $100 gimmick accessory, it'll do just fine.

Keeping in mind that the iCade's creators never expected it to hit a production line, we're impressed at how closely the device mimics ThinkGeek's original design. $100 may be a lot to spend on an iPad accessory (though it's less than the $150 price tag proposed on April 1, 2010), but the arcade cabinet is well-constructed, and simply looks awesome on our desk. It's also the only accessory that we can see hanging on to for decades, long after we think of the iPad 2 as a thick, overweight relic that didn't even include a built-in handset or hoverboard mode.