Praying mantises get extra-tiny 3D glasses to test their vision

Switched On: The old adventures of new 3D 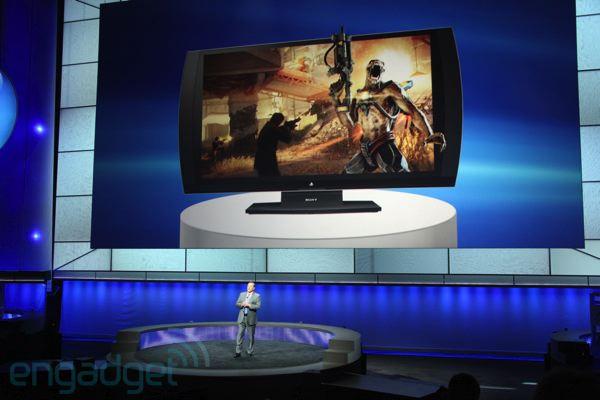 Jack Tretton just announced PS3 gamers can get into the 3D game for much less this fall when the company launches a 24-inch monitor and active shutter LCD glasses under the PlayStation brand. $499 gets the monitor, a pair of glasses, an HDMI cable and a copy of Resistance, while additional pairs of glasses -- which are compatible with TVs from other manufacturers and can be used to give two split-screen gamers their own full screen view -- are $69. That's a competitive package to be sure, but many will likely still need to be convinced slipping on the specs is worthwhile, and competitors like Vizio are slipping passive 3D glasses TVs in with similar price points and similar features.

Update: Sony has issued a press release (included after the break) with full specs: it's a 1080p edge LED lit LCD with two HDMI inputs, stereo speakers, an integrated subwoofer and claims to be the first display at this size with "quad speed frame sequential display technology". The glasses charge via USB and will be available at the same time as the screen this fall.

TOKYO, June 6, 2011 /PRNewswire/ -- Sony Computer Entertainment (SCE) today announced that it will release a 24-inch 3D Display available this fall in Japan, North America, Europe/PAL territories, and Asian countries/regions. For North America, the 3D Display comes bundled with 3D Glasses, an HDMI cable and the highly anticipated Resistance 3 title from Insomniac Games for PlayStation®3 (PS3®) at an attractive recommended retail price (RRP) of US$499.99. 3D Glasses included in the 3D Display bundle will also be sold separately, concurrently with the 3D Display , at RRP of US$69.99 in USA. Through the introduction of this new product, PS3 users will have easy access to all of their 3D entertainment by simply connecting PS3 to the 3D Display.

The 3D Display features a 24-inch full HD LCD display and, in an industry first for its size*1, the display adopts quad-speed frame sequential display technology that is able to minimize crosstalk*2 distortion, delivering stunningly realistic 3D viewing experiences. The 3D Display supports several 3D formats, including "frame packing," "top and bottom" and "side by side," which will offer users various options for enjoying 3D.

The 3D display offers a broad range of other attractive features, including:

The 3D Display adopts stereo 2ch+subwoofer speakers that can generate a broad range of sound from low pitch to high pitch. Featuring stereo 2ch incorporated on the side of the screen, right and left sides, and subwoofer on the backside of the screen, users can enjoy games and other entertainment content with high quality and dynamic sound.

Adopting edge-LED lighting as the backlight, the 3D Display is 35 mm thin (the thickest part) and features a curved line form factor that is both stylish and unobtrusive in living spaces, complementing the sleek design of the PS3 system.

Versatility for the supported devices

Along with 3D Glasses, the 3D Display comes bundled with an HDMI cable to provide high-definition 3D entertainment out of the box. The display adopts two HDMI input connectors, allowing users to connect the display to the PS3 system as well as to other HDMI-supported device*3. Some devices including PlayStation®2 and PSP® (PlayStation®Portable) can be connected to the 3D Display by using a component input connector.

With quick start-up mode, users will only have to wait for one second after pushing the power button to boot the display. The 3D Display also offers a power saving mode which shifts to auto standby if it does not receive a video signal for more than five seconds. Additionally users can utilize the separately sold BD remote control (CECH-ZRC1), incorporating infrared transmission to operate the 3D Display remotely.


Through the introduction of new peripherals, SCE will continue to further expand the PS3 platform and create a new world of computer entertainment that is only possible on PlayStation.

Release date
To be announced by regions after fall, 2011

Recommended
retail price
499.99$US (North America) The price in other countries and regions will be announced by regions when ready.

* Items included in the bundle may vary by regions.

Recommended
retail price
69.99$US (North America). The price in other countries and regions will
be announced by regions when ready.

Battery time
About 3 hours for 3 minutes rapid charging, about 30 hours for
45 minutes charging

PlayStation and PSP are registered trademarks and PS3 is a trademark of Sony Computer Entertainment Inc.

All other trademarks are property of their respective owners.
In this article: 3d glasses, 3d monitor, 3d tv, 3dGlasses, 3dMonitor, 3dTv, active shutter, ActiveShutter, breaking news, cech-zed1, cech-zeg1, e3, e3 2011, E32011, glasses, playstation 3, Playstation3, ps3, sony
All products recommended by Engadget are selected by our editorial team, independent of our parent company. Some of our stories include affiliate links. If you buy something through one of these links, we may earn an affiliate commission.
Share
Tweet
Share