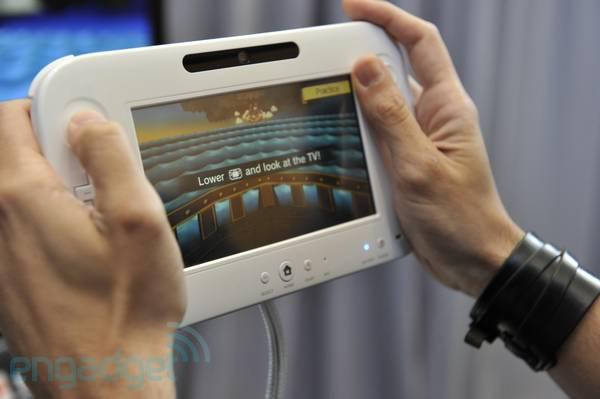 We just elbowed our way through the crowds and managed to get our first hands-on time with Nintendo's revolutionary new controller, the Wii U. As you can see in the images, it's a rather different thing than even the company's typically unusually styled contraptions. The dominant feature is the center-mounted 6.2-inch touchscreen, which actually looks really good. We'd expected Nintendo would cheap out to keep costs low, but that doesn't appear to be the case, at least not in our first impressions. Join us after the break for more details. In the hand the controller feels light, and it feels comfortable. It's most similar to the old GameCube controller, really, but much wider and with more buttons. There are four face buttons, a D-pad, dual-analog sliders, start, select, and four more 'round the back: ZL, ZR, L, and R. All fall to hand quite readily, even for gamers with bigger mitts. Looking back at ya is a front-facing camera, and there's a plain plastic stylus tucked in the top, so we're certainly looking at a resistive touch display.

We got hands-on time with a simple game called Shield Pose that is a good demonstration of the gyro and accelerometer aspects of the game. Here you have to fend off a vicious flotilla of pirates who are firing... vicious suction cup arrows at you. You have to swing the controller up and around to catch the arrows from the various ships, but in a curious twist of difficulty you actually have to do it to a very specific beat. So, it's also a rhythm title, and a pretty tricky one at that.

We also played a game called Chase Mii, which is a simple game of tag played with multiple gamers. Up to four players play on the TV, each getting a 3D view at their Mii running through a maze. A fifth character plays on the Wii U controller and has a private view of the locations of all the other players, who are trying to catch him and only have a vague idea of where the main character is thanks to an arrow. It's another simple but fun game that shows the potential here.

Finally, there's a title called HD Experience, which is basically just a tech demo showing what Twilight Princess might look like rendered in HD. You can't do much other than control the camera and change from day to night but the graphics are certainly impressive -- much better than the Wii could manage. We're not ready to say we're talking superior graphics to the current competition, the Xbox 360 or the PS3, but it's certainly a big jump forward. And, of course, being able to pump those graphics to either the controller or the TV is a nice touch. Try as we might we couldn't get anyone to spill the beans about the resolution of the touchscreen, but it looks to be 16:9, and we'd guess it's at least 720p.

It's interesting that Nintendo chose this year to unveil the controller ahead of the console, a 180 degree twist from the E3 unveil a few years back, where we saw the console first. Does this mean all will be unveiled in Tokyo at TGS in a few months? We'll be there to find out.

Zach Honig contributed to this report.
In this article: e3, e3 2011, E32011, handheld, hands-on, nintendo, touchscreen, video, wii, wii u, WiiU
All products recommended by Engadget are selected by our editorial team, independent of our parent company. Some of our stories include affiliate links. If you buy something through one of these links, we may earn an affiliate commission.
Share
Tweet
Share