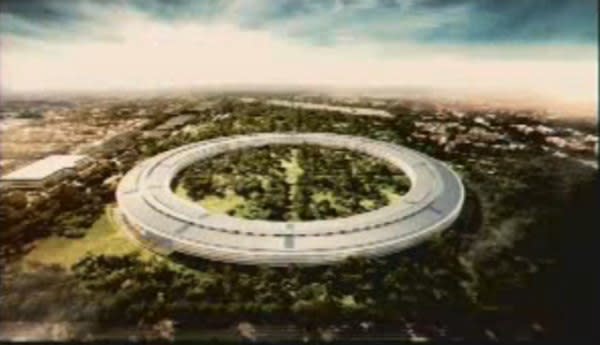 Shortly after taking the stage at WWDC, Steve Jobs made an appearance before the Cupertino City Council to pitch the local governing body on Apple's ambition to build a new campus. The site for the curvaceous, four-story, "human-scale" building to house 13,000 employees is the original home of HP's computer systems division, land that was recently sold to Apple. The property is currently covered by a series of big asphalt parking lots. Apple's plan would increase the landscape coverage from 20 to 80 percent with the help of a senior arborist from Stanford who will help restore some of the indigenous plant life to the property, including the apricot orchards. Apple plans to make the campus' energy center the facility's primary power generator using natural gas and other "clean energy" sources -- the city would simply provide backup power when needed. Of course, what would a Jobs presentation be without a few choice superlatives? In this case, Jobs claims that the new curved-glass facility will be the "best office building in the world," luring in students of architecture anxious for a peek. Apple plans to break ground in 2012 with a 2015 move-in date.

As an aside, it's fascinating (and yes, troubling) to observe Gilbert Wong, Mayor of Cupertino, guffaw at Steve's "jokes" like a smitten schoolgirl, going so far as to fawn over his own iPad 2 in front of the assembly. For his part, Jobs seems to bite his tongue during several exchanges particularly when one city council member tries to extort free WiFi from Apple in an apparent quid pro quo. Click through to see what we mean.

In this article: apple, architecture, business, campus, city council, city wifi, CityCouncil, CityWifi, cupertino, government, headquarters, hq, silicon valley, SiliconValley, steve jobs, SteveJobs, TL17APLSCE, video, wifi
All products recommended by Engadget are selected by our editorial team, independent of our parent company. Some of our stories include affiliate links. If you buy something through one of these links, we may earn an affiliate commission.
Share
Tweet
Share