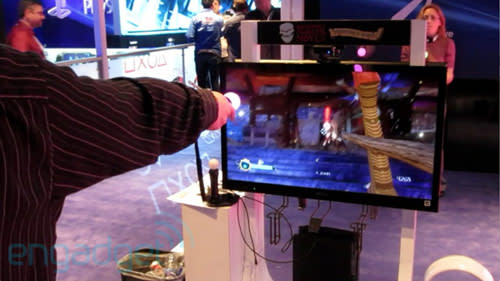 Medieval Moves: Deadmund's Quest may be built on the mini-game mechanics of last year's Sports Champions, but its whole is greater than the sum of its parts. We hit up Sony at E3 2011 to see if Deadmund could out-fence the Jedi in a duel of 1:1 swordplay and on-rails battle. What we found was surprisingly responsive. Deadmund himself runs on a pre-set path, plodding his way through a skeleton-filled barracks automatically. Deadmund's on-screen sword matched our wand-equipped wrist's every move, accurately slicing skeletor wannabes any way we saw fit. Reaching behind our back with the Move controller let us pull a virtual arrow from a quiver, or we could choose to dispatch baddies by flinging throwing stars.

If the on-screen slashfest lagged behind our physical slicing in any significant way, we didn't notice -- we were too busy loving the Move's speedy response time. Faster swings produced "stronger" in-game sword attacks, or farther flying shurikens. Last year at E3, we accused the PlayStation Move of just skirting outside of gimmick-land, but it's hard to argue with 1:1 motion control this responsive. Will Deadmund move Sony's motion lollypop to the front of the gesture control race? Probably not on his own, but it's still great to see this tech at its best. Check out our hands-on playthrough video after the break to see the action for yourself.