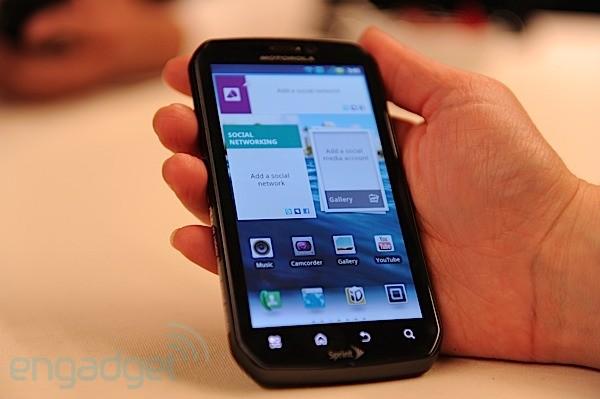 You know something big is about to go down when you can get the CEOs from two major tech companies to sit down together for lunch. As suspected, today's Sprint / Motorola event, presided over by Dan Hesse and Sanjay Jha, marked the debut of the rumored Photon 4G. The handset packs a 4.3-inch qHD display, 1GHz dual-core NVIDIA Tegra 2 processor, 1GB of RAM, 16GB of built-in memory, and pre-installed Gingerbread -- plus, for better or worse, the latest version of Blur. The skinny new smartphone's got front and rear facing cameras (the latter of which is eight megapixels), a dedicated camera button, and micro-USB and HDMI ports, which will hook into a soon to be announced docking device.

The handset is the first from a US carrier to offer up global 4G connectivity, and it's also got 3G support, should you need it (that's CDMA / WiMAX in the US and GSM internationally). Enterprise functionality, traditionally a bit of an oversight with Android handsets, is present too, thanks to business-minded tools built into Blur and increased security, courtesy of the manufacturer's acquisition of 3LM ("Three Laws Mobility" to its friends). Sprint's influence shines through as well, with the inclusion of a built-in active kickstand on its rear, a first for a Motorola device. Flip it open, and the display will automatically switch to landscape mode for optimal viewing.

We managed to get a little hands-on time with the device prior to the announcement, and by and large, the touchscreen and software seemed quite responsive. The handset itself is both skinny and narrow and feels good in the hand, though the smooth back doesn't offer much in the way of traction for those prone to dropping their phones. The buttons on the device were a bit stiff and sunken, though we'll have to hold off on passing judgment on that front, since this is a pre-production unit -- hopefully we'll get out hands on something more final in the near future. The Photon 4G is set to hit Sprint this summer -- an exact date and price point have yet to be announced. MOTOROLA PHOTON 4G
The Perfect Blend of Business and Pleasure

Sprint and Motorola are taking wireless innovation to a new level with Sprint's first 1GHz dual-core NVIDIA® Tegra™
2 processor smartphone on the Sprint 4G Network, Motorola PHOTON™ 4G. Motorola PHOTON 4G provides on-the-go
users with an edge in managing their lives, from anywhere in the world. Built with Android 2.3 Gingerbread, Motorola
PHOTON 4G, combined with Sprint's 4G network, lets users browse, download and multitask at maximum speeds to
support their on-the-go lifestyles. Motorola PHOTON 4G does it all, providing users with an array of versatile tools like
the Motorola webtop application, allowing users to access and create content from a larger screen while connected to
a Motorola accessory dock*. Motorola PHOTON 4G offers the perfect blend between personal and business needs and
boasts enterprise quality security for Android™, international GSM capabilities, a 4.3-inch qHD display, dual cameras
and a kickstand for hands free viewing.

ENTERTAINMENT:
•
Dual cameras – 8 megapixel HD video capture camera and VGA front-facing
camera
•
720P HD Video capture and the ability to output HD video (1080P) via HDMI
•
Android Market™ for access to more than 200,000 applications, widgets and
games available for download to customize the experience
•
HD Multimedia Dock* and Car Dock* for a truly unique handset experience
•
16GB of on board memory, support for up to 32GB SD Card, for a total of up to 48GB
•
Ability to utilize the webtop application while connected to a Motorola accessory dock to open, view, edit and send
Microsoft Office documents using cloud-based web apps through the full Mozilla Firefox browser
•
Bluetooth® 2.1
•
Wi-Fi® b/g/n

In this article: 4g, android, android 2.3, Android2.3, gingerbread, hands-on, international, kickstand, motoblur, motorola, motorola photon, MotorolaPhoton, photon, photon 4g, Photon4g, sprint, video
All products recommended by Engadget are selected by our editorial team, independent of our parent company. Some of our stories include affiliate links. If you buy something through one of these links, we may earn an affiliate commission.
Share
Tweet
Share