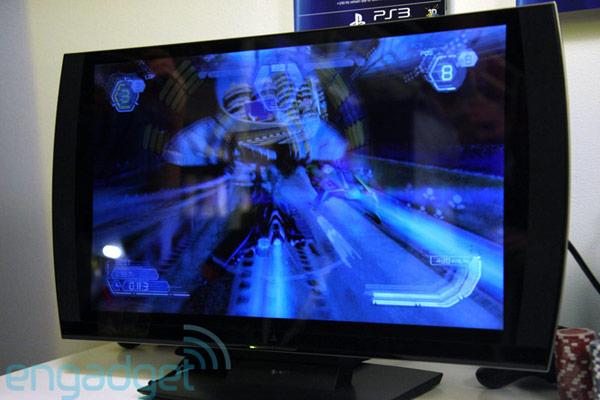 Sony's got some wonderful ideas here at E3 2011, but the company's left quite a few threads for journalists to sew up -- what's the battery life like? How much will continuous client gameplay cost? Just how does that split-screen 3D monitor work? Sony's 3D gaming czar Mick Hocking flew in from Liverpool to talk stereoscopy with the press, and we've got some answers for that last one. What you see above is an LCD panel that refreshes at 240Hz, and delivering 3D at 60 frames per second to each eye, by using the typical active shutter glasses technique of blocking light to your left eye when the "right" image is displayed, and vice versa for the right eye. However, the glasses have a special button that makes both lenses of one player's glasses display images for the left eye, and both lenses of another player display images for the right, allowing each to have their own 60fps feed all the time for private split-screen gaming.

While that potentially means you could use these glasses on non-Sony 3DTVs too and get the same effect (or, you know, just pick up a Sharp Quattron 3D or Vizio Versus, which do much the same thing). Hocking told us that this particular unit also does additional software processing to reduce ghosting. But what of games? The 3D guru said there'll be a number of titles supporting the feature when the monitor hits this fall, and that other 3D titles could potentially (and easily) be patched if they also support split-screen to begin with. Hocking says developer enthusiasm's been particularly intense for split-screen, even more so than the holographic and head-mounted display technologies that Sony's working on, and we may see the feature integrated in Bravia televisions should the idea take off.
In this article: 3D, 3d glasses, 3d monitor, 3dGlasses, 3dMonitor, active shutter, ActiveShutter, dual view, dual-view, DualView, e3, e3 2011, E32011, glasses, monitor, playstation, PlayStation 3, Playstation3, PS3, shutter glasses, ShutterGlasses, Sony, split screen, SplitScreen, stereoscopic 3D, Stereoscopic3d
All products recommended by Engadget are selected by our editorial team, independent of our parent company. Some of our stories include affiliate links. If you buy something through one of these links, we may earn an affiliate commission.
Share
Tweet
Share