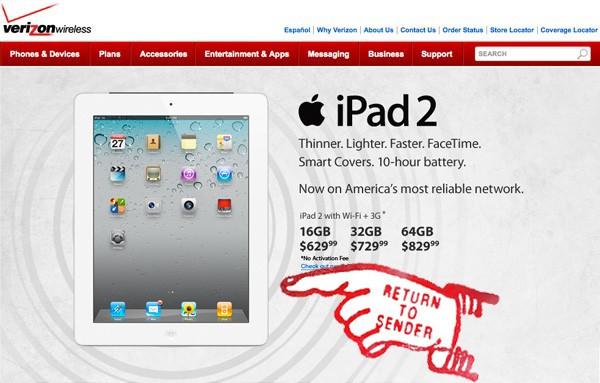 Several 9to5Mac readers noticed a rather peculiar phenomenon this last week -- their freshly-ordered Verizon iPad 2 units shipped all the way from China just fine, only to boomerang back to sender right before delivery time. Now, Reuters has the official word: Apple's recalling an "extremely small number" of Verizon iPad 2s which were flashed with a duplicate MEID code. Should they have been delivered, users would probably have found themselves unable to connect to 3G, or booted off before long, as Verizon reportedly can only have one device with that unique identifier on the network at once. We're not sure whether to applaud, but it's good to see manufacturers taking responsibility for their hardware before it hits shelves.

Update: We spoke with Apple about this, who wouldn't give us much beyond the official quote -- which is, for the record: "Duplicate MEID codes were flashed onto an extremely small number of iPad units for the Verizon 3G network." That said, we were able to confirm that a few of these 3G iPad 2s sneaked through and got into the hands of customers. Apple is, of course, replacing those free of charge, so if you're in possession of a brand new iPad that was never able to get on 3G... you know who to call.

In this article: Apple, bug, error, errors, fault, faulty, iPad, iPad 2, Ipad2, issue, issues, MEID, mistake, recall, recalls, return, return to sender, returns, ReturnToSender, tablet, tablets, Verizon, Verizon Wireless, VerizonWireless, VZW
All products recommended by Engadget are selected by our editorial team, independent of our parent company. Some of our stories include affiliate links. If you buy something through one of these links, we may earn an affiliate commission.
Share
Tweet
Share