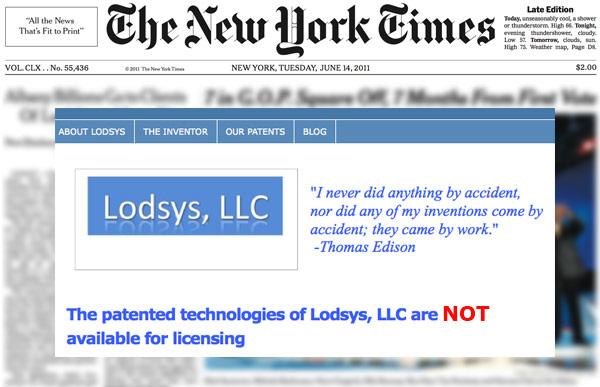 Indie developers turned to the Web hours after receiving warning letters from Lodsys last month, but larger devs took a more traditional approach, leaving the communication and finger-pointing to lawyers instead. Two such companies, the New York Times and OpinionLabs, came to light after filing suit against the patent troll yesterday, seeking declaratory judgements to invalidate Lodsys's patents. A nine-page complaint filed by NYT lists four Lodsys patents, including 7,222,078, which had previously been used to target smaller developers. NYT's ad click-through system and OpinionLabs' surveys were both also targeted, and if the suits are successful, Lodsys would be responsible for all legal expenses, and wouldn't be allowed to collect on its patents in the future.

We spoke with Julie Samuels of the EFF, who explained that filing for a declaratory judgment could theoretically enable NYT and OpinionLabs to have trials held in California and Illinois, where the declaratory judgments were filed, instead of the Eastern District of Texas -- the notoriously plaintiff-friendly court where Lodsys filed its suit against seven devs on May 31st. Other devs who received letters but have not yet been sued can also do the same. The suits brought by NYT and OpinionLabs formally call the validity of Lodsys's patents into question, but unfortunately don't change the game for devs Lodsys already sued, who would still be responsible for licensing fees and other damages if the court determines the patents to be valid (and their apps to be infringing).