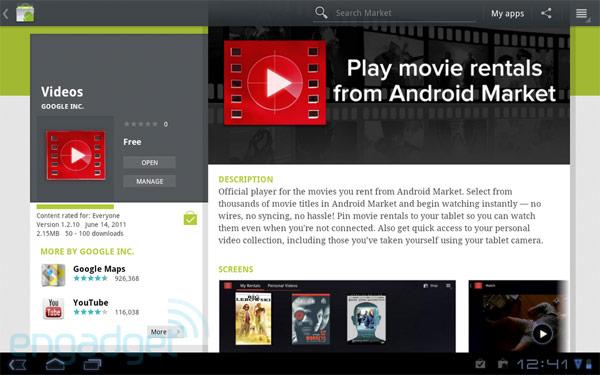 Hard to say why Google chose to roll its Movies app out first to 3G-packed tablets sporting Android 3.1 (a smaller testbed, perhaps?), but it looks as if it won't matter for much longer. We've received a number of tips this evening suggesting that Google Movies can now be downloaded from the Android Market by WiFi-only Xoom tablets, though some are seeing a litany of server errors when trying to actually use the service. That said, we didn't see any issues here at Engadget HQ, so it's possible that a few kinks are still being worked out on select servers. Give it a whirl and let us know how it turns out in comments below, and if you're a proud owner of a Galaxy Tab 10.1... well, we guess you're also the proud owner of a trait called "patience."

[Thanks to everyone who sent this in]
In this article: android 3.1, Android3.1, app, google, google movies, GoogleMovies, honeycomb, motorola, Motorola Xoom, MotorolaXoom, movies, tablet, tablet pc, TabletPc, wifi xoom, WifiXoom, xoom, youtube
All products recommended by Engadget are selected by our editorial team, independent of our parent company. Some of our stories include affiliate links. If you buy something through one of these links, we may earn an affiliate commission.
Share
Tweet
Share