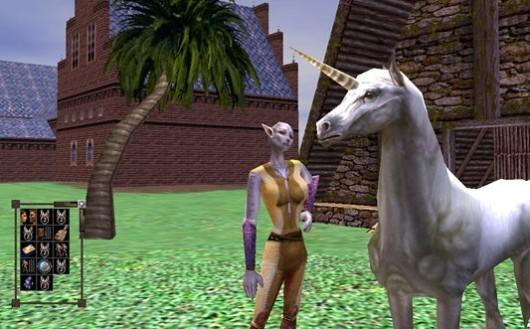 Two months ago, we heard a rumor (which has since gone quiet) that a new Ultima Online sequel might be in the oven in Electronic Art's kitchen. As with any rumor, it was important to take it with a grain of disbelief, although a pinch of hope seems appropriate in this case as well. After all, Ultima Online's been begging for a sequel ever since the hit MMO started facing stiff competition in the form of 3-D worlds like EverQuest and Asheron's Call.

For some of us gamers, word of a UO sequel feels like deja vu, and rightly so. This wouldn't be the first time that EA embarked on a project to make a more modern Ultima Online, nor would it be the second time. Indeed, the saga of Ultima Online's canceled sequels is as torrid as it is steamy and lusty. Ignore the words in the previous sentence, as those are just to up the hits on search engines.

In our continuing series on the "what ifs?" of axed MMOs, we're going to head into a two-parter full of savage truth, dangerous decisions, and full-frontal nerdery. Ladies and gentlemen, I present to you the saga of Ultima Online 2.

Begging for a sequel

Designed by Origin Systems (Wing Commander) for its parent company EA, Ultima Online was the first MMO to hit 100,000 subscribers and prove to the world that this fledgling genre could actually be something of a cash cow (not to mention hugely popular). While Lineage, EverQuest, World of Warcraft and the rest soon eclipsed the title in terms of sheer numbers, UO would forever hold the title of blockbuster breakout.

It wasn't long before Electronic Arts started thinking "sequel," as it's always been the company's motto to sequelize the hell out of any hit game. And in the case of Ultima Online, it kind of made sense, as UO itself was the latest in a long, long string of Ultima RPGs.

One of the drawbacks of being a cutting-edge pioneer is that the Ultima team didn't have a lot of comparisons from which to draw, and so the devs were often just feeling things out in terms of what worked and what didn't. After a few years' worth of experience under their belts, the developers had a number of ideas how to do the game even better -- and in the new-fangled 3-D that was all the rage.

Originally given the much saner title of Ultima Online 2 and billed as "the second generation of MMORPGs," Ultima Worlds Online: Origin's development was announced in 1999 with the goal of a late 2000 release. Once again, Origin Systems took the lead on the project and came up with a few fairly interesting ideas as the series leaped into the third dimension.

In an early preview, Gamespot found the game to be a step up from its contemporaries: "Ultima Worlds Online: Origin certainly looks good; though it uses a third-person, behind-the-back camera view reminiscent of Asheron's Call's default perspective, Ultima Worlds Online: Origin has a much more detailed world populated with much larger and more highly-detailed characters and monsters."

Reflecting the often-shifting world of Ultima, UWO:O would take place in an alternate timeline to UO, when disasters have reshaped the world and sparked an industrial revolution. Fantasy collided with steampunk in a big way, and anyone entering the game would have to handle the juxtaposition of wizards and clunky robots. Dynamic weather effects were to provide an additional layer of immersion for adventurers.

Three races -- the warrior-like Juka, the magical Meer, and the standard Humans -- were to be the sole player options. In making the jump to 3-D, Origin used motion capture to provide lifelike animations for character movement and fights. Because characters could no longer cap out multiple skills (or "classes"), grouping was heavily emphasized, with expected gangs of roving players to number between 20 and 30.

It's tantalizing to think of this world gone unexplored. When one of the technical directors was asked about what his favorite effects were in the game, he responded by saying, "Just last week, I saw some gorgeous dragon wings with specular highlights, cool shiny weapons (using a form of environment mapping, for you tech heads), flaming arrows, and a lot more. I can't really answer this since it changes each week though -- there's that much cool stuff."

Reflecting the shifting trends of the day, UWO:O would be more player friendly by limiting PvP to consensual duels and specific areas. This was in response to the negative player feedback of Ultima Online's (then) free-for-all PvP, which was a Big Deal back then. You wouldn't be able to kill your best friend in cold blood whenever you felt like it? That's it, I'm quitting!

While video game sequels are typically guaranteed moneymakers, the same didn't (and still doesn't) necessarily apply to MMO sequels. The fact that UWO:O's development process started rocky and only got rockier helped not one whit.

Following UO's success, EA commissioned a number of proposed MMOs, such as Wing Commander Online and Harry Potter Online (I'll wait for you to stop drooling). However, the sequel-ness of UWO:O took priority, and EA yanked team members away from other IPs and threw them into Ultima Online 2. For folks used to working on science-fiction, it was too much, and several quit.

Obviously, Ultima Worlds Online: Origin didn't make its 2000 launch date, and by early 2001, EA announced that it was pulling the plug on the project -- all of Origin's projects, actually -- axing hundreds of employees and shifting resources back to UO. It was then that Richard Garriott resigned from EA to start work on Tabula Rasa along with a number of other ex-Origin employees.

According to Origin System's David Swofford, EA didn't want to monkey with UO's success by introducing a competing project: "I think when they saw UO2 they saw a product that was very similar to UO that's already a proven success, and rather than to continue on with two products paralleling each other, they probably decided to continue the upward movement of the original by throwing more resources at UO and making it even better than it is now."

Of course, you'd think the studio would've thought about that prior to giving the OK to the project. And then again before commissioning a new sequel a couple years later.

But that's a story for another day! In the meantime, check out this trailer:

When not clawing his eyes out at the atrocious state of general chat channels, Justin "Syp" Olivetti pulls out his history textbook for a lecture or two on the good ol' days of MMOs in The Game Archaeologist. You can contact him via email at justin@massively.com or through his gaming blog, Bio Break.
In this article: ac, asherons-call, cataclysm, david-swofford, deja-vu, duel, ea, electronic-arts, eq, everquest, featured, full-frontal-nerdery, gamespot, harry-potter-online, history, juka, lineage, meer, pk, pking, player-killing, pvp, richard-garriott, sequel, sequels, steampunk, the-game-archaeologist, trailer, ultima-online, ultima-online-2, ultima-worlds-online, ultima-worlds-online-origin, uo, uo2, uwo, uwoo, video, wing-commander-online, World-of-Warcraft
All products recommended by Engadget are selected by our editorial team, independent of our parent company. Some of our stories include affiliate links. If you buy something through one of these links, we may earn an affiliate commission.
Share
Tweet
Share