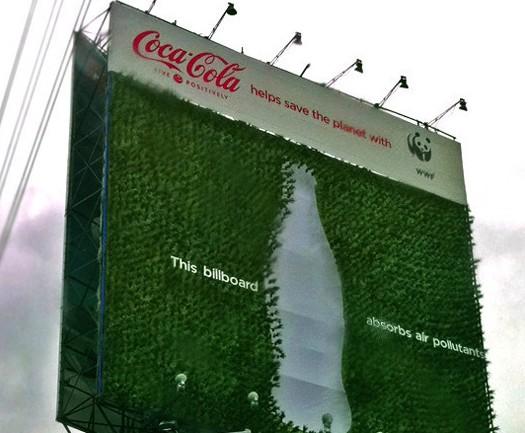 Sure, we've seen plenty of cool billboard features over the years, from facial recognition to interactive Pong games, but few have managed the dual feat of promoting a popular soft drink and making the world a slightly greener place. All of that fuzzy area you see surrounding the silhouette of the Coke bottle in the above 60 by 60 foot billboard is made up of a number of Fukien tea plants, each of which can soak up around 13 pounds of carbon dioxide per year, for a combined total of 46,800 pounds. The plants are housed in pots made from recycled Coke bottles and are watered via a drip irrigation system. The billboard is the product of a partnership between Coca-Cola Philippines and the World Wildlife Fund. No word on when it might be greening up more skylines around the world. Press release below.
Show full PR text

Coca-Cola Philippines and World Wide Fund for Nature-Philippines (WWF) today unveiled the first plant billboard in the country, an iconic structure to represent the long-standing partnership between the two organizations to make a positive difference in the environment.

Water Stewardship -- Since 2008, Coca-Cola Philippines has partnered with WWF in an effort to help conserve critical watersheds in the country. It is one of the environmental initiatives implemented by Coca-Cola Philippines to strive to be a water sustainable business and replenish the amount of water equivalent to what the company uses in all of their beverages and their production.
Climate Protection -- Coca-Cola Philippines is a major corporate partner of WWF in this year's Earth Hour and in the other programs throughout the rest of the year challenging individuals, companies and organizations to go "Beyond the Hour."

The 60 x 60 ft. plant billboard, located along Northbound EDSA-Forbes, utilizes a thriving species of Fukien tea plant, which absorbs air pollutants. According to botanist Anthony Gao, each plant can absorb up to 13 pounds of carbon dioxide in a year, on the average. "This billboard helps alleviate air pollution within its proximate areas as it can absorb a total of 46,800 pounds of carbon dioxide from the atmosphere, on estimate." Gao says.

Recyclable materials were used for the overall make-up of the billboard. 3,600 pots were used, recycling old bottles of various Coca-Cola products. These bottles were filled with a potting mixture made up of a combination of industrial by-products and organic fertilizers-a formulation that is stable and light-weight. These bottles were also designed to contain the plants securely and to allow the plants to grow sideways. Additional holes were made for proper drainage and for holding the drip lines in place.

A drip irrigation system, also known as trickle irrigation or micro-irrigation, was especially installed for efficient water distribution. This irrigation method saves water and fertilizer by allowing water to drip slowly to the roots of plants, through a network of valves, pipes, tubing and emitters. The system is operated on a schedule to distribute water with nutrients to the plants. It provides the plants with what they need when they need it.

With all the eco-friendly mechanism it employs and the relevant advocacy it stands for, this innovative advertising is a salient reminder for Filipinos to take an active hand in protecting and saving the environment.

"We are proud that we have brought to life the first plant billboard in the country. It is an embodiment of our company's Live Positively commitment to making a positive difference in the world by incorporating sustainability into everything that we do. With this, we hope to inspire Filipinos to join us in our journey, because we know that together, we can make a positive impact," said Guillermo Aponte, president of Coca-Cola Philippines.

In this article: ad, ads, advertisement, billboard, billboards, coca-cola, coke, environment, green, Philippines, plants, pollution, recycling, world wildlife fund, WorldWildlifeFund, wwf
All products recommended by Engadget are selected by our editorial team, independent of our parent company. Some of our stories include affiliate links. If you buy something through one of these links, we may earn an affiliate commission.
Share
Tweet
Share