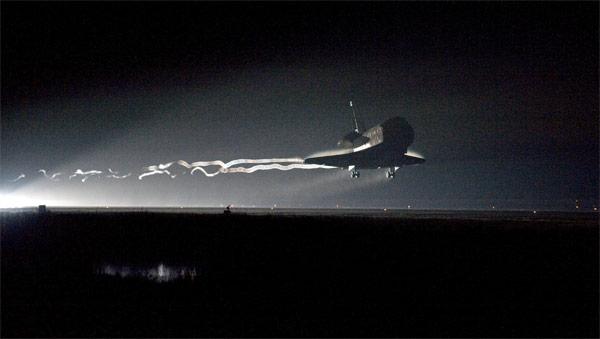 It's hard to even believe these words, but they're true: the last scheduled US space shuttle launch happens today. What started as a frenetic race to another world has ended as a program that will forever be remembered for sparking the interest of mere tykes, and if this so-called economy ever gets turned around -- heck, maybe we'll see the hiatus end. In all likelihood, it'll be Sir Richard Branson making the next moonwalk, but rather than sit around and mourn the quiet death of the space shuttle, we'd prefer to share a few of our fondest memories here. And by all means, please deliver any final words of your own in comments below.

Tim Stevens: As a kid, for me, the space shuttle might as well have been science fiction. It was so far away from Vermont, its launchpad situated amid such an alien landscape, that I just couldn't relate. I guess I'm one of the few who didn't dream of becoming an astronaut -- but I didn't aim much lower. Chuck Yeager was my hero, and I spent many, many hours buying many, many farms on his Advanced Flight Trainer on the C64. Still, I huddled around the TV with all my friends to watch every launch, and I cried with them too when we figured out why the Challenger's arcing trail of vapor had split so abruptly.

I almost went to a launch as a kid when I was visiting my father, who lives in central Florida. Well, I should say that I did go to a launch, but the launch didn't return the favor. My dad took me to Cape Canaveral, going a little too fast in his '88 Cougar, ticket delivered by an officer who didn't care we were running late and the timer was a timin'. No matter, the launch was canceled, and my shot at seeing one first-hand missed. I did hear the boom a week later when the shuttle coasted supersonically overhead on its way to the Kennedy landing strip, and that gave me tingles, but never seeing a launch will go down as a lifetime regret. Hey, catching an Orion launch in a few years will be just as cool, right?

Darren Murph: Full disclosure: I was certain I'd be an astronaut back in my earlier days. I couldn't wait to walk on the moon. I couldn't wait to eat freeze-dried ice cream sandwiches for a solid month. And now, I suppose I should be thankful I fell into a different career path. NASA has a huge place in my heart. I remember but a blip of my childhood, but two weeks that I'll never forget were ones I spent in Huntsville, Alabama and Titusville, Florida. Those are where I attended Aviation Challenge and Space Camp, respectively. Some of my fondest memories of human interaction happened there -- I met a guy who read a book from back to front, and it blew my mind. Turns out he was just from another country, and flew all the way to America for a five-day glimpse at the technology that we so often take for granted.

I can never say that I made it on a bona fide mission, but I most certainly gunned a few folks down in a flight simulator, and I most definitely felt zero gravity in some sort of weird wall-climbing contraption. It was my first real taste of otherworldly tech, and I was absolutely hooked from that point forward. I actually did look briefly into attending NC State's heralded Aerospace Engineering program, but the sheer quantity of math courses required to procure that degree will frighten off all but the most hardened number crunchers. I've never lost respect for just how ambitious this whole thing is, and while I've been to all 50 states in the nation I call home, driven a Hyundai down a dodgy dirt path in rural Panama and flown over Mount McKinley, I've never touched a star. Here's hoping I get the chance, someday.

Sean Buckley: Summer days of my youth were filled with hide-and-seek, water gun wars, freeze tag, and on odd, lucky days, shuttle launches. I'll never forget rushing into the house at my Mother's call, pushing past my brothers and friends to get a view of the TV -- the space shuttle was launching. A lifetime of science fiction never prepared me for the chills I got watching America's heroes reach for the sky, and it still scares me today how unreal reality can be. Shuttle liftoffs and landings never fail to blow my mind or challenge my perceptions of what mankind is capable of. When Atlantis spreads her wings for that last flight, I know I'll be right there with my boyhood self: riveted, amazed, and selfishly plowing over anyone who dares get between me, and my view of the launchpad. Godspeed, gents.

Michael Gorman: I grew up just 20 minutes down the road from Huntsville, Alabama, home to the U.S. Space and Rocket Center and Pathfinder, a full-size space shuttle mock up. I remember the first time I got to see Pathfinder up close, riding atop that iconic orange fuel tank and flanked by two massive solid rocket boosters -- to a seven year old kid, it might as well have been the Millennium Falcon. This was a full-on spaceship, a proper vessel for carrying man to the stars and back, not some cramped pod strapped to the top of a rocket that flutters back to earth hanging from a trio of parachutes. After seeing one in person, my love for NASA and the shuttle program never wavered. I was fortunate enough to attend Space Camp some years later and participate in a shuttle mission simulation, which only strengthened my appreciation for the technology, audacity, and skill needed to make space flight possible. To this day, I am amazed by the Shuttle program's accomplishments: from giving us nonpareil views of the cosmos by launching (and fixing) the Hubble telescope to helping build man's beachhead in space, the International Space Station.

Now, the shuttle's time is at an end, to be replaced (eventually) by more powerful and modern rockets. While I welcome the possibilities these new launch and crew vehicles bring -- and hope among them is the renewal of our nation's lunar conquest -- the shuttle will forever remain my spacecraft of choice.

Terrence O'Brien: Like most good little nerds I've had a fascination with space for almost as long as I can remember and, to this day, I'd give up just about anything to spend even a brief time in orbit. That being said, the shuttle program itself never held a special place in my heart. I've always viewed the shuttle as equal parts triumph of American ingenuity and a symbol of our lost ambition. What was once our crowning achievement in the space race has, in the ensuing 30 years, become merely evidence that our drive for scientific progress and sense of adventure has dried up. Little has changed about the reusable orbiter since it took its first gravity-defying steps in 1981, and through much of its time in service it's served only as a poster boy (or girl) for the stagnant state of space exploration. We haven't set foot on the moon since 1972 and we're no closer to sending a manned mission to Mars than we were when Columbia first orbited the Earth. Truth be told, the shuttle program is long over due for retirement. But this is not a happy day or a bitter sweet day -- this is just a sad day. There is no immediate successor to the shuttle, and two previous next-gen space flight programs have already been killed off. For the time being American astronauts will instead hitch a ride aboard the Russian Soyuz for missions to the International Space Station. We were once the clear leaders in the race to the planets and beyond, but now, we're outsourcing our all our orbital travel needs -- though, what's more American than that?

Zach Honig: I imagine that the years-long dream of one day piloting the Space Shuttle was simply unavoidable for anyone Growing Up Geek. The thrills of blasting through the atmosphere while Earth fades from view, swimming through the air as you eat bars of tomato soup, and performing critical research experiments aimed at bettering the lives of the billions of people back home were impossible to overlook. I never made it on-board the Shuttle, nor did I head down to Space Camp, as much as I may have wanted to as a kid, but I did spend a summer earning my private pilot's license, perhaps to fill the void left by my voluntary exclusion from the program. To date, I've never flown beyond 12,000 feet AGL -- behind the yoke, at least -- and probably never will, but a trip to space will forever remain on the bucket list, until the day that I make it up there, if only for a few minutes.

Josh Fruhlinger: I am taken back (vaseline on lens) to my formative years when Star Wars, Battlestar Galactica (the original, less-sexy one), and Space 1999 (look it up) dominated my pre-teen thoughts. Before girls stopped being gross, let's say. I spent my afternoons at my friend's house dreaming up zero-gravity emergencies aided by his nuclear-scientist father's garage - the soldering masks, electric engines, and sheet metal presses were fodder for many trips to Mars. Of all these breezy days in Anaheim, there is one I remember most fondly: The day Columbia launched. We sat on his living room floor, legs crossed, eyes wide open as a real-life space ship sat on a giant launch platform. We counted down in sync with Mission Control "4...3...2...1..." and I remember some country song about Columbia was dubbed in as the contrails drifted out of the earthbound camera's range. We ran back outside, our space fantasies fueled anew.

In this article: editorial, galaxy, NASA, shuttle, space, space race, space shuttle, SpaceRace, SpaceShuttle
All products recommended by Engadget are selected by our editorial team, independent of our parent company. Some of our stories include affiliate links. If you buy something through one of these links, we may earn an affiliate commission.
Share
Tweet
Share