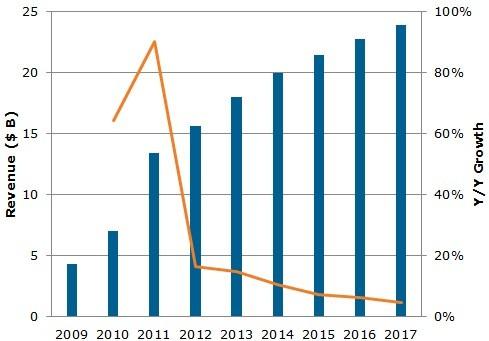 This just in: people really like touchscreens, and their tastes aren't going to change anytime soon. That's the takeaway from a new report from market research firm DisplaySearch, which predicts that revenue from touch panel sales will hit the $13.4 billion mark by the end of this year, before soaring to nearly $24 billion by 2017. Shipments of capacitive touch displays, in particular, are expected to increase by 100-percent over last year, accounting for a full 70-percent of all tactile revenues. The mobile market still accounts for most of this industry-wide growth, but demand for touch-based tablets is accelerating considerably, with more than 72 million panels expected to ship this year, and 100 million projected in 2012. Jonesing for more numbers? Better gallop past the break to get your hands on the full PR.
Show full PR text
Touch Panel Demand Soars; 2011 Revenues to Grow by 90% Y/Y

Shipments for in-cell touch, which first came to market in 2009, didn't materialize in 2010. However, in-cell touch is expected to take off in 2012 as yield rates improve. On-cell touch, meanwhile, has seen greater adoption, but the mix has shifted to smaller screen sizes used in mobile phones and digital still cameras, whereas it has had difficulty competing with projected capacitive in tablet PC applications. Other touch technologies are experiencing market growth, such as combination-type touch panels which offer both pen and finger touch.

Mobile phones are the major application for touch screens in terms of unit shipments, accounting for two-thirds of units shipped in 2010. DisplaySearch forecasts that 868 million touch screens will ship for mobile phone applications in 2011, up 68% Y/Y.

The tablet PC represents a fast-growing application for touch screens, accounting for 26 million units in 2010. Growth continues to be strong, with DisplaySearch forecasting over 72 million touch screens for tablet PCs in 2011, and over 100 million in 2012. Revenues for projected capacitive touch screens in tablet PCs are expected to grow by more than $1 billion in 2011.

Touch penetration is increasing in consumer gaming devices, including consoles such as Microsoft Kinect, as well as handheld games such as the Nintendo 3DS. Over the next few years, notebook and all-in-one PCs as well as automobile monitors are expected to contribute to touch screen market growth as well. Touch technologies with high transmittance, low power consumption, multi-touch or gesture recognition will benefit the most.

The DisplaySearch Touch Panel Market Analysis report is a comprehensive analysis of the touch panel technologies and their market forecasts through 2017. This report has a detailed breakdown of 22 applications (with tablet PCs application) with 11 touch technology categories and nine size categories. It also has details on touch controller ICs, the sensor market, and an area and multi-touch forecast through 2017.