In this article: apple iphone 4, AppleIphone4, chong pak, ChongPak, feature, fisheye lens, FisheyeLens, funding, insert coin, InsertCoin, iphone 4, iphone 4 camera, iphone camera, iphone lens, Iphone4, Iphone4Camera, IphoneCamera, IphoneLens, kickstarter, lens, macro lens, MacroLens, olloclip, patrick oneill, PatrickOneill, review, video, wideangle lens, WideangleLens
The age of lugging around a pricey DSLR kit just to capture casual fisheye, wide-angle and macro photos may be nearing its end -- for some of us, at least. Designed by a startup duo in California, the Olloclip was the first project featured in our Insert Coin series, and we were thrilled to learn not only that it was successfully funded, but that the device is ready to ship to both early supporters and new customers just two months later. The accessory brings the functionality of all three lenses to the iPhone 4, and it does so well enough to warrant leaving your pro kit at home on occasion -- assuming, of course, that your photographs aren't responsible for putting food on the table.

While a bargain compared to its professional equivalents, $70 is a lot to spend on any iPhone accessory, so the lens's price tag may not sit well with some users. Also, design limitations mean you won't be able to use the lens with other devices, and there's no way to guarantee compatibility with future iPhones as well. Nonetheless, we had a blast shooting with the Olloclip, and we think you will too. Head past the break to find out why.%Gallery-128329%
Olloclip
0
SCORE
Engadget
N/A
Critics
6 reviews
80
Users
1 review
90 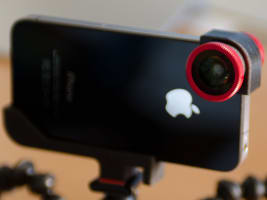 
At first glance, the Olloclip only appears to include two lenses, but unscrewing the wide-angle reveals the cleverly hidden macro. To use any of the built-in lenses, simply slide the clip onto your iPhone. The fit is quite snug, so you can rotate the phone, walk around, and even slip your phone into a bag without worrying about the lens slipping off. It's also easy to reposition -- to swap the wide-angle for the fisheye, for example, just flip the entire clip around so that the lens you want to use is facing forward. As with all sub-$100 optics, it doesn't have the sturdy, metal construction of, say, a $2,000 professional-class Canon L-series lens, but for a pocketable accessory with a potentially limited shelf life, we're more concerned with the device's performance than we are with how it feels in our hands. The plastic lens mount is also less likely to damage the glass body of your iPhone 4, so we don't mind that the clip itself isn't made of metal.

Though it's small enough to fit inside your front pants pocket, the lens still protrudes from the iPhone in a big way. The rather obnoxious product branding also makes it conspicuous, but that, at least, is removable (we chose to detach it for our product photos, and new Olloclips ship without the logo sticker). Even without the branding, it's an eye-catching device, prompting several locals to approach us with questions during our testing in New York City. One woman even asked us to demo the lens for her. As it happens, she tried out the fisheye lens, and was very impressed with the results.

The Olloclip ships with lens caps for both primary lenses, and a small carrying pouch that also doubles as a microfiber cleaning cloth. Because of its size, we found ourselves constantly touching and smudging up the lens accidentally, so that microfiber cloth will certainly come in handy. The device is available with either black or red barrels -- both constructed from anodized aircraft-grade aluminum. A ridged simulated filter mount surrounds the fisheye lens's front element, complimenting the lens aesthetically, though clearly not serving any functional purpose, as you won't be adding any filters to the Olloclip. The multi-element lenses are constructed of precision-ground glass, and that's clearly reflected in the image quality we were able to achieve here.


The Olloclip is incredibly easy to use. You don't need to install any software, though it's compatible with any and all iPhone apps. And mounting or swapping lenses just takes a second, as you can see in our hands-on video. We did have some trouble using one hand to remove the wide-angle lens to expose the macro, as we were using the other hand to hold the iPhone, though unscrewing the lens while it's mounted on the phone is less of a challenge. It's also important to note that because of the iPhone's higher multiplication factor in video mode, the wide-angle and fisheye lenses will present a completely different perspective when shooting video than they do when capturing stills. Don't be discouraged, however -- the video crop factor actually eliminates much of the distortion we experienced with the wide-angle lens (more on that below).


Since the optic functions simply as an extension of the iPhone's existing lens, the quality of the images it captures are limited by the sensor itself. Fortunately, the iPhone 4's camera offers a huge improvement over its predecessor, enabling the Olloclip to capture some pretty fantastic photos. Pics we shot with all three lenses were sharp and vibrant, and were clearly distinctive from those captured with the iPhone's native lens. Most wide-angle lenses suffer from minor barrel distortion, but unfortunately we found distortion with the Olloclip's wide-angle lens to be far more noticeable than what we've experienced with a wide-angle lens on a DSLR. These distortion issues are clearly visible in our gallery of sample images. As with any fisheye lens, you'll notice some significant barrel distortion here, too, but that's to be expected -- after all, that stretching is kind of the whole point of fisheye photography.

We were perhaps most impressed with the macro lens, which essentially functions as a very powerful magnifying glass for your iPhone. We were able to capture incredible detail with this lens. In a photo we shot of our high-density notebook display, we could clearly make out individual red, green, and blue pixels. This capability alone is enough to justify the expense of adding the Olloclip, especially for anyone who enjoys macro photography but doesn't have the luxury of having a pro kit nearby at all times.%Gallery-128347%


Apart from the barrel distortion we mentioned earlier, we were exceptionally pleased with the photos we took with the Olloclip. Sure, the compact, dual-sided, three-in-one lens won't match the image quality of a pro rig, but considering its size and versatility, it may just become the next must-have accessory for Apple's iPhone 4. You may also argue that a handful of the thousands of available photo-enhancing iPhone apps can duplicate some of the lens's functionality, but none will ever be able to match the caliber of images you can capture with the help of some high-quality hardware components. Aside from the distortion, our primary concern with the Olloclip has to do with the product's shelf life, considering it's tied to a device that's unequivocally nearing the end of a cycle. We imagine the company will be able to adapt future versions to accommodate new iPhone models (and perhaps even smartphones from other manufacturers), but the current version will likely be replaced whenever the next iPhone is released. Keeping that in mind, we love the Olloclip, and plan on shooting with it as long as our hardware allows.