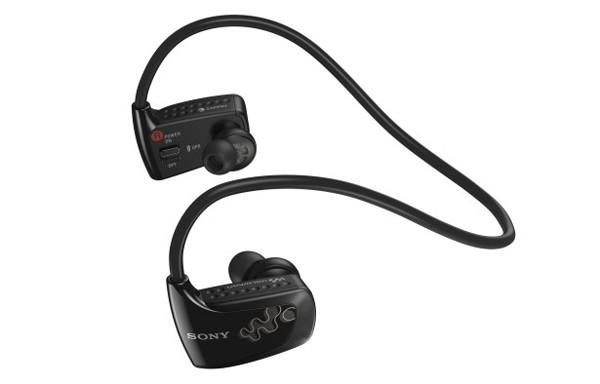 As far as unusual designs go, Sony's been having one productive week. First the tablet team showed off the funky S1 (and funkier S2) and today Walkman's managed to grab our attention. The outfit just announced the NWZ-W260 series, a music player baked directly into a pair of lightweight headphones -- all told, a bolder setup than this. In case it wasn't already obvious, Sony has its eyes set on the sweaty, gym-going type, and to sweeten the deal it's coated the player in a water-resistant finish. It's rated for up to eight hours of battery life, and also packs a quick charging technology that would allow you to rebound to an hour's capacity after just three minutes. The included software, meanwhile, allows you to drag and drop tracks from Windows Media Player and iTunes for Windows -- so long as they're not DRM-protected, 'o course. It'll go on sale next month, with a 2GB version (the NWZ-W262) fetching $59.99 and a 4GB number (NWZ-W263) going for $79.99.

Meanwhile, it's clear Sony's got some more players coming at the higher end of its lineup. The company just pushed four A860 series Walkmans through the FCC, with capacities ranging from 8GB to 64GB -- a new high for Sony. CNET has also been chatting up sources who say the player will have a large OLED screen, noise-canceling technology, and Bluetooth 2.0. Meanwhile, FCC documents also show Sony is prepping a pair of S760 series players with either 8GB or 16GB of storage, an LCD screen for video playback, and Bluetooth. As CNET notes, Amazon jumped the gun and listed them in Europe with converted prices of $225 to $494 for the A series and $182 to $211 for the S series. How much will they actually cost once they arrive stateside? Looks like we'll find out soon.
Show full PR text

WHAT: The new Sony Walkman W260 Series, the official music player of the Rock 'n' Roll Marathon Series, is designed to conveniently and comfortably accompany its user to the gym, trail and treadmill. The water-resistant frame ensures it can withstand sweat from intense workouts in any weather condition.

The W series Walkmanplayer comes with Content Transfer software that allows users to easily drag and drop music files from iTunes® for Windows®, Windows Media Player or Windows Explorer (DRM free content only). A 2 GB and a 4 GB option will be available. The 2 GB W Series Walkman® player can hold approximately 470 songs while the 4 GB option can hold about 990 songs.1

Endorsed by world-class marathon runner and US Olympic silver medalist Meb Keflezighi, the NWZ-W260 series Walkman playeralso offers a convenient quick-charge function. With only three minutes of charge time, the player can run for up to 60 minutes and full battery life is up to 8 hours.2 The new NWZ-W260 series Walkman player is available in two colors, black and white.

*1: Based on 4 minute length at 128 kbps. 1 GB equals 1 billion bytes, a portion of which is used for data management functions.

*2: Actual performance varies based on settings, environmental conditions, and usage. Battery capacity decreases over time and use.