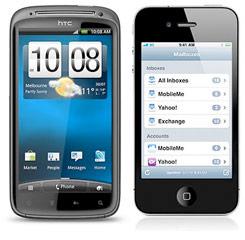 Talk about a sting to start the weekend. The International Trade Commission has just made an initial determination in the ongoing patent infringement case between HTC and Apple (not to be confused with yet another, similar case involving Apple and Samsung), and it's not looking great for HTC. The judge ruled that HTC had infringed on two of the ten patents in question, and if this ends up flushing through, it's possible that select HTC products would be banned from ever arriving in the US. More likely, however, is a settlement between the two at war, with HTC forking out untold quantities of greenbacks in exchange for Apple backing away from the blockade trigger. 'Course, it's hard to say how negatively this will impact other Android handset makers, many of which may run into the same sorts of legal hurdles. Naturally, HTC's already saying that it'll appeal the ruling, while Cupertino's legal team is remaining mum. And, you know, grinning slyly.

Update: All Things D is reporting that the two patents in question are 5,946,647 and 6,343,263, the former of which is said to be "fundamental to Android." It's also worth noting that said patent is one that's being argued over in a separate Apple vs. Motorola battle. That said, we aren't passing judgment just yet. HTC general counsel Grace Lei stated the following: HTC will vigorously fight these two remaining patents through an appeal before the ITC Commissioners who make the final decision. We are highly confident we have a strong case for the ITC appeals process and are fully prepared to defend ourselves using all means possible."

In this article: android, apple, breaking news, htc, infringement, iphone, itc, patent, patent infringement, PatentInfringement
All products recommended by Engadget are selected by our editorial team, independent of our parent company. Some of our stories include affiliate links. If you buy something through one of these links, we may earn an affiliate commission.
Share
Tweet
Share