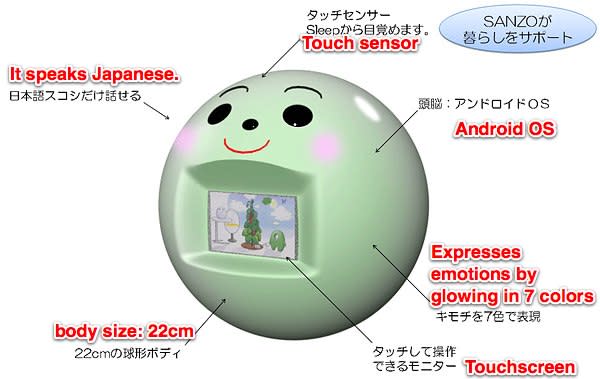 First we had the spherical drone and now we have the spherical butler. Sanyo's Mirai Sanzo robot won't do housework unfortunately, but it will interpret your voice commands and relay them to your home automation system, just in case you happen to live in the type of wondrous abode depicted after the break. To fulfill its mission as a "communication robot," the WiFi-connected 22cm helper comes with a touchscreen, touch sensors (for switching on and off) and voice recognition -- all powered by an undisclosed version of Android. It can also show seven different emotions by glowing in various colors, making it about three times more expressive than some humans. Mirai Sanzo will be out in Japan any time now, and while we're not sure of the price, we have tried to translate the name. We arrived at "Future Bob", but we're open to other suggestions.

In this article: android, butler, home automation, HomeAutomation, Japan, mirai sanzo, MiraiSanzo, robot, sanyo, Sanyo Homes, SanyoHomes, spherical
All products recommended by Engadget are selected by our editorial team, independent of our parent company. Some of our stories include affiliate links. If you buy something through one of these links, we may earn an affiliate commission.
Share
Tweet
Share