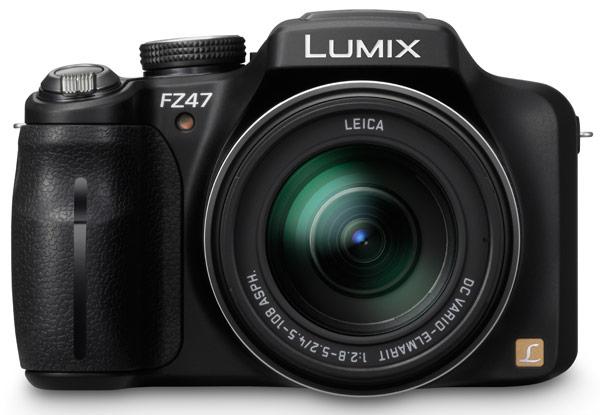 Sure, these days nearly all digital cameras can shoot video, but only a small handful give you the power to manually select aperture and shutter speed while doing so. The Lumix FZ47 is Panasonic's latest high-end point-and-shoot to sport this functionality, providing full control over both video and still photo capture with its Creative Control mode. The 12.1-megapixel superzoom can shoot 1080i HD at 30 fps, though it's notably lacking in the 1080p department. There's also a 3-inch LCD, 24x Leica zoom lens with a 25mm wide-angle focal length, and an option to shoot 3.5-megapixel stills while recording video. For photographers wiling to settle for a good deal less power, Panasonic also just announced its entry-level Lumix LS5, which includes a 14.1-megapixel sensor, optical image stabilization, and 720p video, all powered by a pair of AA batteries. The $400 FZ47 will ship next month, while the LS5 hits stores in November, with pricing yet to be announced. Jump past the break for the complete rundown from Panasonic.

"The LUMIX FZ-Series is an extremely popular line for Panasonic and we expect this model to be another winner for users who not only want an impressive 24x optical zoom, but those that seek exceptional image quality, and thanks to the Leica lens and full HD video capabilities – the FZ47 delivers," said Darin Pepple, Senior Product Manager, Imaging, Panasonic Consumer Electronics Company. "New to the FZ-Series are the improved AF speeds, 3D photo shooting and full 1080 HD video capabilities."

Powered by a 12.1-megapixel Hi-Speed CCD sensor, the LUMIX FZ47 can produce the high-speed, large-capacity signal processing required for 1920 x 1080 full-HD video recording in the AVCHD format, and high-speed continuous shooting. The Venus Engine FHD processor helps create superb image quality in both photo and video recording, while also powering the Intelligent Resolution technology to perform the optimum signal processing. With Intelligent Resolution, the LUMIX FZ47's zoom can be extended 1.3x times to a 32x zoom length. The LUMIX FZ47 can take high-resolution consecutive shots at 3.7 fps in 12.1-megapixel full-resolution and maximum 10 fps at 3-megapixel recording. With Panasonic's Sonic Speed AF (Auto Focus), the LUMIX FZ47 has a quick start-up time, approximately 35% faster than the Panasonic LUMIZ FZ40, and also has an incredibly fast response time, helping to catch any fast-action photo opportunity. Additionally, the LUMIX FZ47 has fast and accurate AF Tracking.

The LUMIX FZ47's 24x optical zoom optimized for video recording with a mechanism designed to minimize the noise of AF and zooming. The full-HD video capability is complemented with the high-quality stereo sound of Dolby® Digital Stereo Creator, to offer extremely realistic audio. And with a Wind Cut function, the LUMIX FZ47 reduces noise from background wind automatically. While shooting video, users can simultaneously take a 3.5-megapixel still photo.

Differentiating itself from most digital cameras that record video, the LUMIX FZ47 is unique in that it features a Creative Video mode, which lets the user set the shutter speed and aperture manually. Changing the shutter speed brings special effects to videos, which is especially suitable for shooting a fast-moving subject. The ability to control the aperture is convenient when there are several subjects at different distances and it is desired to have each of them stand out.

Other features of the Panasonic LUMIX FZ47 include:

• 3D Photo Mode: Take 3D still photos** that can be played back on MPO-compatible 3D equipment, such as a Panasonic VIERA 3D HDTV
• 3.0" Intelligent LCD: Features a 460,000-dot high resolution
• Social Media Connection: The LUMIX FZ47 makes it extremely easy to share photos via Facebook and videos via YouTube. As soon as the camera is connected to the computer it will prompt the user with an easy-to-follow menu asking if they want to share the images – no software needed

"The LUMIX LS5 is the ideal digital camera for an entry-level user who wants an extremely easy to use digital camera that does not sacrifice image quality," said David Fisher, Product Manager, Imaging, Panasonic Consumer Electronics Company. "With top-quality features like HD video and an F2.8 26mm wide-angle lens, the LS5 is giving consumers exceptional performance and value, while being easy-to-use and convenient. By adding a LUMIX model that runs on AA batteries, we are mindful that consumers have different needs and preferences."

The new LUMIX LS5 records HD video in 1280 x 720p at a smooth 30 fps – which is ideal for viewing on a High Definition Television. Users with a VIERA® HDTV, can simply remove the SD Memory Card from the LUMIX and insert it into the built-in SD Memory Card Slot on the VIERA HDTV to enjoy HD videos and photo slideshows. The LUMIX LS5 can also record video in standard VGA (640 x 480) and QVGA (320 x 240). With the included YouTube and Facebook Image uploader, users can easily share their photos and videos via popular social networking sites.

The Panasonic LUMIX LS5 will be available in black in November 2011. Pricing will be announced approximately 30 days prior to shipping. For more information about Panasonic LUMIX digital cameras, please visit: www.panasonic.com/lumix.
In this article: 1080i, camera, cameras, digital camera, DigitalCamera, HD video, HdVideo, Lumix FZ47, Lumix LS5, LumixFz47, LumixLs5, panasonic, Panasonic Lumix, panasonic Lumix FZ47, panasonic Lumix LS5, PanasonicLumix, PanasonicLumixFz47, PanasonicLumixLs5, superzoom, superzoom camera, SuperzoomCamera
All products recommended by Engadget are selected by our editorial team, independent of our parent company. Some of our stories include affiliate links. If you buy something through one of these links, we may earn an affiliate commission.
Share
Tweet
Share