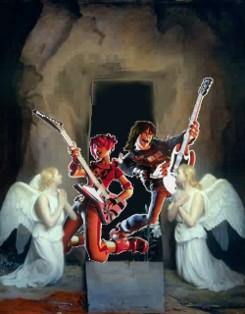 Stop mourning wannabe rock stars -- Guitar Hero is coming back. We heard the rumors of its demise were greatly exaggerated, but now word has come straight from Activision Blizzard CEO Bobby Kotick that the game is currently being reinvented for a modern, more demanding audience. As he told Forbes, "we're going to take the products out of the market, and we're not going to tell anybody what we're doing for awhile... we're going to use new studios and reinvent Guitar Hero. And so that's what we're doing with it now." So there you go -- Guitar Hero's retirement was only temporary. Like any good performer it'll be back before you've even had a chance to miss it. Looks like the franchise will keep rocking out well past its prime. What's the console equivalent of playing a state fair?

In this article: Activision, activision blizzard, Activision-Blizzard, ActivisionBlizzard, game, games, gaming, guitar hero, GuitarHero, resurrection, return, Rhythm, Rhythm Game, RhythmGame
All products recommended by Engadget are selected by our editorial team, independent of our parent company. Some of our stories include affiliate links. If you buy something through one of these links, we may earn an affiliate commission.
Share
Tweet
Share