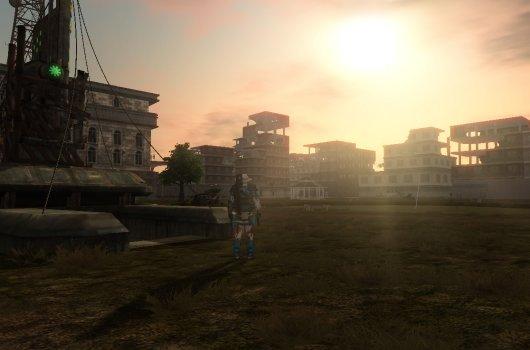 Sector 4, a new skill and abilities system and a new... well, a new everything has come to Fallen Earth. Even the forums will be migrating over to GamersFirst's little piece of cyberspace. While the transition hasn't gone completely smoothly, it could have been a lot worse. I don't know why they decided to do all this stuff at once, but it went well, considering how major an undertaking it probably was. The skills and abilities (also known as the "combat system") didn't fare too well with the wastelanders, and the devs have promised some fixes. With everything going on right now, I don't think we'll see them any time soon, though I may be wrong.

One thing is for sure: The new combat system is here to stay. Many of us would like to see them scrap it, go back to the old system and just patch up its imperfections (it was so close). But, I have been told emphatically that it's here to stay. So, instead of dwelling on the what-ifs, I'd like to take a look at all of the new skills and mutations, since they are definitely permanent -- although they may be changing a little bit in the coming days while this brand-new system is tested and balanced.

Mostly what we have now is what we are going be using. Some of them are the same, but by and large, this new system is an entirely different animal. You may recognize some of the names, but most of the abilities (actually, I think all of them) function differently. After the cut, we will take a look at every skill and their associated abilities in the game.

There are no more capstones, so choosing a character build style is a little tougher. In the end, most of us wind up with First Aid, a weapon skill and a smattering of other stuff. All of the prepared attacks, many of which are in the weapon skill lines, can be used for any type of weapon. In other words, the Rifle skill abilities can be used with a melee weapon. Once you wrap your head around it, it's a pretty cool concept. Weapons also do damage based on your skill level and you can "miss" even though you hit (cursor on target) if your skill is low enough. Plus, all auras are stackable now. Yes, collect them all if you can.

It's not just new skills and mutations, the whole system is so different that it's almost unrecognizable. You now get 30 AP per level rather than 20. The reason for this is that the stats associated with a skill or mutation no longer raise the minimums when they increase. Every single point in a skill line must be spent starting at zero. Gamma is now determined by Charisma and Intelligence, and Stamina is a product of Dexterity and Coordination. I know it's kind of counter-intuitive, but I would guess it's that way for balancing purposes. Health is still determined by your level, Strength, and Endurance. With that said, here are the skills and abilities:

Armor Use: AU still determines your damage mitigation when factored with the armor you wear. Armor doesn't have an AU skill requirement, it now has a minimum level requirement. To get the most out of your armor, you need high AU. This skill line has only two skills. Dreadnaught, which isn't much different than our old Dreadnaught. It is a stance in which you sacrifice speed for durability. Soak Elements is a stance that lowers your primary armor and improves your secondary and tertiary armor.

Dirty Tricks: This is a new skill line that focuses on debuffing your target. It has three abilities, all of which are prepared attacks that can be used with any weapon type. Dirty Steel is a combination of a poison-based damage-over-time (DOT) effect and an armor debuff. Kneecap is a snare (which slows the target), and Sabotage is an armor debuff.

Dodge: Dodge still affects your overall damage taken and the rate at which you are critically hit. Instead of simply opposing the weapon skill, it now opposes the weapon skill, Precision and Power (which are two other skills I'll cover later). Dodge only has one ability, a stance called Duck and Weave, and it absorbs damage and drains Stamina on a per-hit basis.

Escape Artist: This line is the stealth line. It determines (by being pitted against the observer's Perception) whether or not you can be seen on radar. It also has four subterfuge abilities. Dash is a quick burst of speed much like the old ability. Shake It Off is a status removal effect and can be stacked with itself to remove high-level negative effects. Lucky Break increases your save ratings temporarily, and Misdirection raises your armor (primary, secondary and tertiary) for a short time.

First Aid: This is the go-to line. It is absolutely essential for PvP and PvE (and probably even RP). First Aid has four abilities associated with it. Resuscitation brings a dead clone back to life. Stanch Wound heals you for a good deal and another clone for even more. It uses a bandage and also adds a small (teensy-weensy) heal-over-time to your buff bar. Suck It Up and Renew both remove status effects and can be used together to remove strong effects.

Group Tactics: This line includes three auras and a debuff. Overwhelm is a debuff that lowers the targets armor, ranged and melee defenses, and marks them with an effect as well. Offensive Coordination increases Precision and stamina regeneration, but lowers ranged and melee defense. Combat Endurance improves your team's stamina, gamma pools and regeneration. And Give 'em Hell increases your team's Power.

Heavy Weapons: This skill line allows the use of weapons such as grenades and the rocket launcher (and more weapons eventually, I hope). It also has two abilities. Soften 'em Up reduces the target's fire and piercing resistances, and Caltrops is an area-of-effect snare.

Melee: This skill determines your competency with all melee weapons and determines your base damage and critical chance. There are also two abilities that come with this line. Charge is a short burst of speed and a small offensive buff. Provoke increases your threat (makes NPCs more likely to attack you), and debuffs their defenses slightly.

Pistol: This line determines your competency with pistols, submachineguns and sawed-off shotguns. It also has two abilities, but they are useful for other weapon types as well. Concentration is a stance that improves your Pistol and Precision skills, and Incendiary Strike is a fire-based DOT.

Power: Power adds to the amount of damage you do. It is directly opposed by the target's Dodge skill. Power has Attack Posture, which is a stance that increases your Power. And Dent Armor, which is an armor debuff that also stuns NPCs.

Precision: This skill increases your chances of landing critical hits. It is directly opposed by the opponent's Dodge skill. This line also has two skills. Precise Hit is a prepared attack that adds additional piercing damage to your attack and will slow the movement of NPCs. Keep in mind that prepared attacks can be used with any weapon type. Perfect Timing increases your chance to score a critical hit for a short while.

Rifle: This skill line determines your competency with rifles of all kinds, crossbows and shotguns. It also has two skills associated with it. Agonizing Wound slows a target and Bullseye is just like Precise Hit, as it adds piercing damage to the next shot that hits.

Social: This skill line determines your discount in buying and selling with the NPC vendors. It also has three abilities tied to it. Flag of Truce works exactly the same as it always has, making you neutral to all of the factions temporarily. Inconspicuous lowers your threat (aggro) from your target. Diplomatic Immunity gives you a nice boost to your armor and defenses, but you can't do much of anything without canceling it.

That covers a quick look at the new skills and their abilities. I wanted to tackle the mutations as well, but even with brief descriptions it would have been far too verbose. This was just meant to acquaint you with the new skill lines. And considering it's all new to me too, I couldn't really go into great detail about them if I had the space. I hope this helps you plan a direction for your clone, unless you've already chosen that. I'll see you in the wasteland or here next week. If you see a guy by the mailbox in Los Alamos scratching his head, that's probably me.

Ed Marshall has been playing Fallen Earth since beta and leads the KAOS clan. Wasteland Diaries is his weekly column that covers all aspects of Fallen Earth: PvE, RP and PvP. To contact Ed, send an email to edward@massively.com, find him on the official forums as Casey Royer, or hunt him down in the wastelands as Nufan, Original, Death Incarnate, and Knuckles Mcsquee.
In this article: abilities, f2p, f2p-model, fallen-earth, fallen-earth-llc, featured, gamersfirst, icarus-studios, new-combat-system, new-skills, sector-4, skills, statistics, transition
All products recommended by Engadget are selected by our editorial team, independent of our parent company. Some of our stories include affiliate links. If you buy something through one of these links, we may earn an affiliate commission.
Share
Tweet
Share