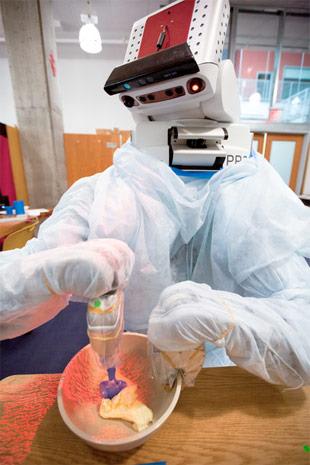 Aww, look! Bakebot's soooo cute! He's actually cooking things these days, thanks to MIT grad student Mario Bollini, who recently upped the creature's skill level in an effort to grab more calories with less effort. Little did he know, however, that teaching a self-contained machine how to feed the future uprising wasn't exactly the best long-term move. No, that creeping feeling of fear isn't unwarranted.

Darren: "01001111 01001101 01000111 00100000 01000011 01001111 01001111 01001011 01001001 01000101 01010011!"
Terrence: "Bakebot's lessons with the master chef were going so well, until his Bork to binary translator failed"
Brian: "Bakebot love kitten. Bakebot eat kitten."
Brad: "Stephanie! Johnny no add vanilla!"
Sean: "It's so unfair! I have eight other senses, but I'd trade them all -- even smision -- to be able to taste."
Christopher: "Rachel Ray hit a wall with 15 minute meals, so we found a faster, more charismatic replacement. Meet Rachel Number 5."
Michael: "Here I thought the robot apocalypse would be powered by nuclear fusion and laser beams, turns out it'll be running on profiteroles and delicious cakes."
Jon: "I'm toasting bread in my head right now...seriously"
Zach: "You want me to wear a what? Why don't you trying sticking a fan in your scalp. Then you can tell me to wear a hairnet."
Joseph: "How do ya like my ganache now, Martha???"
Daniel: "A robot may not injure a cupcake or, through inaction, allow a cupcake to come to harm."
Richard Lai: "How do you like them cookies, Firefox?"
Jose: "How am I supposed to add a teaspoon of sugar with this underperforming Kinect camera?"
Kevin: "Enough with the cakes, what was Leia saying about our only hope?"
Dana: "I. Love. A. Little. Bourbon. In. My. Cookies. Don't. You."
Richard Lawler: "Death to all humans. Sweet, delicious, chocolatey... death."
Don: "Just don't call him Iron Chef. He hates that."
Billy: "Ace of Cakes was canceled because I annihilated the host.. now I must weaponize that Millennium Falcon cake."
Zachary: "Jobless MIT grad narrowly avoids soup kitchen, emerges from basement with replacement mother."
In this article: bake, bakebot, baker, Caption Contest, CaptionContest, comedy, cook, cookie, cooking, funny, Mario Bollini, MarioBollini, mit, pr2, robot, robot apocalypse, RobotApocalypse
All products recommended by Engadget are selected by our editorial team, independent of our parent company. Some of our stories include affiliate links. If you buy something through one of these links, we may earn an affiliate commission.
Share
Tweet
Share