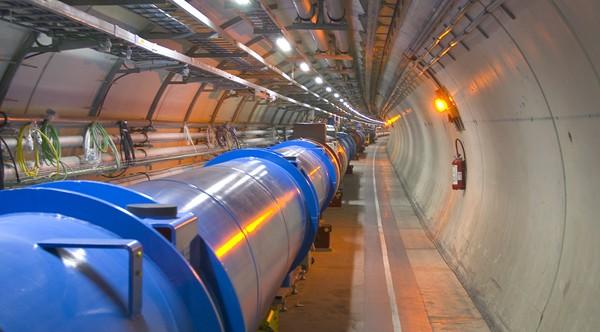 "You break it, you bought it," came to mind when researchers at the Centre for European Nuclear Research (CERN) announced the LHC@home 2.0 project, giving us regular Joes access to the Large Hadron Collider. OK, we kid; the reality is that much like SETI@home and Folding@home, a whole group of volunteering home computers link up together, and while idle they quietly help simulate LHC particle collisions according to CERN's theoretical models. Scientists there then compare these results with those from actual LHC experiments in order to check for any instrumental or theoretical errors, thus potentially speeding up the mission to find the God particle in a low cost manner.

Besides being a great way to get your science on, the cloud-based program also makes CERN's resources (like crisis mapping and damage assessment) available to researchers in developing nations that may not to be able to afford the accelerator's $6 billion dollar price tag -- but nowadays, what nation can?

An ordinary laptop or PC is all you need to join a global project to help scientists at the Large Hadron Collider, one of the world's most ambitious science projects, understand what happened just after the Big Bang; or prepare maps to help humanitarian relief in the aftermath of a natural disaster.

Volunteers around the world now have the opportunity to get involved in the hunt for the elusive Higgs boson. As part of the European Year of Volunteering, the Citizen Cyberscience Centre based at CERN is launching a new version of LHC@home on 8 August 2011.

The latest version, called LHC@home 2.0, simulates collisions between two beams of protons travelling at almost the speed of light in the Large Hadron Collider (LHC). Scientists working at CERN compare these simulations, based on their own theoretical models, with real data from the four LHC experiments.

The project makes use of the idle time on the volunteers' PCs, bringing them together to form a 'Volunteer Cloud' that can work as a 'virtual supercomputer'.

LHC@home 2.0 is not the only project to benefit from volunteers harnessing the collective power of their laptops and PCs. Through this virtual supercomputer, the Citizen Cyberscience Centre is providing a low cost technology for researchers in developing countries to meet challenges like providing clean water and even tackling vital humanitarian work including crisis mapping and damage assessment.

As Sergio Bertolucci, Director of Research and Scientific Computing at CERN, emphasizes: "While LHC@home is a great opportunity to encourage more public involvement in science, the biggest benefits of citizen cyberscience are for researchers in developing regions who have limited resources for computing and manpower. Online volunteers can boost available research resources enormously at very low cost. This is a trend we are committed to promote through the Citizen Cyberscience Centre".

Leading international computer manufacturers such as IBM and HP have contributed their support and expertise to Citizen Cyberscience Centre projects including UNOSAT. Using data from space agencies and satellite operators around the world, UNOSAT can produce maps for humanitarian applications such as damage assessment or monitoring deforestation. The project relies on 'volunteer thinking' where participants actively analyse imagery and their results are compared.

"From a development and humanitarian perspective, the potential of citizen-powered research is enormous", says Francesco Pisano, Manager of UNOSAT, " Participating in the Citizen Cyberscience Centre enables us to get new insights into the cutting edge of crowdsourcing technologies. There is no doubt that volunteers are playing an increasingly central role in dealing with crisis response, thanks to the Internet."

Professor Dave Britton of the University of Glasgow is Project Leader of the GridPP project that provides Grid computing for particle physics throughout the UK. He is a member of the ATLAS collaboration, one of the experiments at the Large Hadron Collider and has previously worked on CMS, another of the LHC experiments. Commenting on the launch of LHC@home 2.0, Professor Britton said, "Scientists like me are trying to answer fundamental questions about the structure and origin of the Universe. Through the Citizen Cyberscience Centre and its volunteers around the world, the Grid computing tools and techniques that I use everyday are available to scientists in developing countries, giving them access to the latest computing technology and the ability to solve the problems that they are facing, such as providing clean water. Whether you're interested in finding the Higgs boson, playing a part in humanitarian aid or advancing knowledge in developing countries, this is a great project to get involved with."

The Citizen Cyberscience Centre is a partnership between CERN, the United Nations Institute for Training and Research (UNITAR) and the University of Geneva. STFC manages the UK subscription to CERN and, using its e-Science expertise, runs one of the 10 international Tier-1 centres taking data from the LHC and making it available to researchers around the world.
In this article: Centre for European Nuclear Research, CentreForEuropeanNuclearResearch, cern, europe, large hadron collider, LargeHadronCollider, lhc, physics, science, scientists, switzerland
All products recommended by Engadget are selected by our editorial team, independent of our parent company. Some of our stories include affiliate links. If you buy something through one of these links, we may earn an affiliate commission.
Share
Tweet
Share