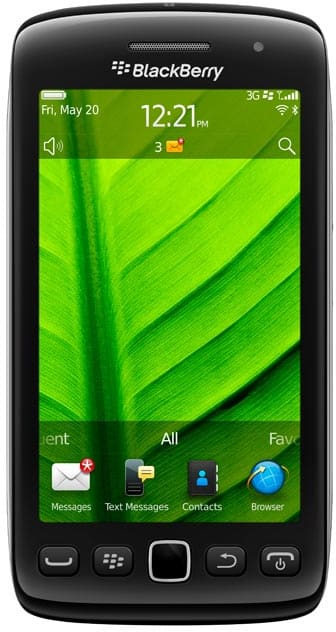 Monza. It's a beautiful part of Italy, a majestic park split by one of the most historic racetracks in the world, and it was also the codename for this rather more homely looking phone. This is a handset that would go on to be known by many names (Storm 3, Touch...) before receiving its final moniker: Torch 9850. Why all the pseudonyms, and why choose to confusingly overlap this with the somewhat similar but rather different Torch 9810 that's also officially launching today?

Maybe RIM didn't know what to make of this keyboard-free phone. Maybe the company wanted to distance itself from the Storm. Or, maybe what we have here is a smartphone that's trying to find an identity by sadly ditching the feature that, for many, makes a BlackBerry a BlackBerry: the physical keyboard. How does this smoothie compare to the others, and is it worth sacrificing all the QWERTY wonder found within the 9810? Read on to find out. if you're down with BlackBerry for the long-haul, you could do worse than the Torch 9850.

How would you rate the Torch 9850?
We want to hear what you think. Post a quick review now to join the conversation!
Write a review

We'll just get this out of the way: the Torch 9850 is not a particularly good-looking phone from the front. The design concept is that of a "waterfall" of glass flowing over the device, a seamless, curving pane that welcomes the curious, clumsy imprint of your fingers. That's all well and good, but that purity of flow is ruined by four oddly proportioned buttons and an optical touchpad at the bottom, sticking out of this current like a bunch of bricks.

That's not to say that physical controls can't look nice -- the set on the Droid Charge look rather good and fit in with the shape of the phone. Here, though, they're just sort of all in a row, like a five-year-old's first attempt at Bedazzling a mouse. Capacitive buttons hidden beneath the glass would be far more agreeable to our aesthetic sensibilities, but these physical inputs at least feel comfortable to the touch. Oh, and they light up pretty, too.

If you want something visually appealing you'll have to flip the phone over. There's a lovely gunmetal band that flows all the way around, looking far more classy than the average touches of blingy plastic chrome used to brighten up other handsets -- indeed, many with RIM provenance.

That polished band runs around a recessed, matte section that is, for the most part, a thin metal battery door. It springs right off with enthusiasm when a tiny button is pressed. Under here is the 1,230mAh battery that powers RIM's new trifecta of smartphones, and a slot for a microSD card -- 4GB comes by default, paired with 4GB on the inside. Dig a little deeper and you'll find a SIM tucked away, needed to help this phone achieve its world-conquering intents. This is the Sprint flavor, so you'll get dual band CDMA / EVDO (800/1,900MHz) with quad band GSM / GPRS / EDGE (850/900/1,800/1,900MHz), 2,100MHz UMTS support and 802.11b/g/n WiFi on 2.4GHz.

That's all backed by the same 1.2GHz processor, 768MB of RAM and "Liquid Graphics" engine found in the other two RIM phones launching today, a tricky trio that have near-identical internals despite rather different externals. Of course, this phone bears more than a passing resemblance to the Torch 9810, but makes do without that one's keyboard.

Instead you get a larger, 3.7-inch WVGA display, set beneath that silica waterfall, looking bright and contrasty and impressive, delivering the same edge-bending viewing angles we saw in the 9930. The screen is the strongest selling point of this phone, something that you'll have to like an awful, awful lot, because to get it you'll have to give up the slide-out keyboard on the other Torch, which is only slightly thicker (14.6mm, vs. 11.5 here) but suffers from a smaller, lower-res, 3.2-inch VGA LCD. On the top of the right edge of the phone you'll find the 3.5mm headphone jack, along with a skinny, somewhat hard to press volume rocker rather lower on the chassis, about the same as on the previous Torch. New in the middle is a tiny little nub that can be used for muting. Lower still is the Convenience Key, which by default takes pictures, but offers a bit too much resistance to let you easily capture shots without blurring.

The very top of the phone is the lock button -- taking up that entire side of the device. Squeeze anywhere here and the phone will lock or unlock itself. On one hand this is intuitive and comfortable, but we found this phone pocket-unlocking itself on more than one occasion thanks to that large, easy to depress sector. We don't need to tell you that pocket-unlocking is bad news. On the left is where the micro-USB port can be found, while the bottom reveals nothing much of interest. The termination of that waterfall, we suppose.

In our testing we found call quality to be quite good on the 9850, whether talking directly into the handset or rather more indirectly to the room using the speakerphone. Indeed that speakerphone is plenty loud enough to fill up offices of nearly any size, to the point where if your office is too big to hear it you'd probably be in a position where you could simply hire someone else to attend that call for you.

Like the new Bold, the Torch 9850 packs a five-megapixel camera on the back, but unlike that one we have a proper autofocus lens here. This means you have the risk of capturing a genuinely out-of-focus image, but the camera does a far better job at grabbing macros than the EDoF lens on the 9930. You can see that in the close-up flower shots in the gallery below. Overall, we found images to look decent here, showing good color reproduction in general, but none succeeded in knocking our dress socks off.

Video capture is at 720p and our footage looks reasonably good, with only a bit of focus-hunting on display. The only notable issue is some jiggle distortion that serves to make things a little livelier than they should. Finally, with no front-facing webcam, video chat is left completely out of the equation.

We delved into BlackBerry OS 7 over in our 9930 review, so we'll refer you there if you're curious about what's new and how it helps out things here. Suffice it to say, though, that there isn't exactly a shocking amount of fresh meat in this bundle of software, and when it comes to the Torch 9850 there's one annoying issue: the lack of a proper home screen. Boot up the phone the first time and you're presented with a lot of display that can be filled with menus but nary a widget or shortcut. Basically, it serves only as a good place to show off your wallpaper. Great.

The BlackBerry integrated search function is a little less useful here than on the other handsets since you can't just start typing -- with only a virtual keyboard you have to first tap on the search icon. But, do tap on it and you'll find an excellent way to dig up any 'ol contact or favorite or document or whatever. Once tapped you can use the impressively accurate voice recognition or struggle with the virtual keyboard, a keyboard that is... adequate.

It has a very similar layout to the on-screen keyboard found on the earlier Torch, but things are rather more square here. As virtual keyboards go it's fine, auto-suggesting as you type and of course using the same smarts that make physical BlackBerry keyboards so nice to use. (Hit space in an e-mail address to automatically add '@' or '.' in the appropriate places, for example.) But, the virtual keys are small and each time you try to find them you'll probably find yourself wishing you had a real keyboard, which you could have if you'd bought the 9810 instead.

The phone comes pre-installed with a full version of Documents To Go, enabling the creation of Word-like, Excelesque and PowerPointish documents. The Torch of course also has full access to the contents of the App World. At this point there is indeed a solid selection of apps, but whether there are enough and, more importantly, the right kind is of course up to you.

Finally, and most notably in this latest OS, is the new browser, which will do your HTML5 up right but turn its nose right up at Flash. Pages load snappily, scroll and zoom smoothly, and the phone scored a very healthy 2,668ms SunSpider score. That matches the score on the Bold 9930 -- unsurprising given they're running the same basic internals. Also unsurprising is that battery life here is not as good, managing six hours and 50 minutes on our intense rundown test. That's nearly an hour and a half short of the 9930 on Verizon, likely thanks in part to the larger display here.

Regardless, that's much higher than your average Android smartphone and we think users will have no problem getting through a full business day -- even if your full business day is more five-to-nine than nine-to-five.

We can't help but feel a bit underwhelmed by the Torch 9850. It's reasonably slim, feels well made and, aesthetics-aside, is certainly not a bad handset. The thing is, it just isn't as good as t'other Torch that's also been released today, the 9810, because a 3mm gain in thickness gets you a full keyboard when you want it (and you will want it) plus a bit more internal storage. Sure, you lose out on screen size, but we never felt like there was all that much to do with the extra pixels here anyway.

In truth, though, all three of the new phones are let down by their software. BB7 is a minor upgrade to BB6 and, when compared to the fluid, intuitive experience of the PlayBook and its QNX-based operating system, we find ourselves here mired in menus and EULAs. This leaves the whole OS feeling dated, tired, and ready to retire, and so if you were hoping for something truly new in your next BlackBerry, this isn't it.

That said, if you're not quite ready to move on to a younger, fresher OS, if you're down with BlackBerry for the long-haul, you could do worse than the Torch 9850. You could do better, though, too.
In this article: 1.2ghz, 98009850, 9850, 9860, bb7, blackberry, blackberry 7, blackberry os 7, Blackberry7, BlackberryOs7, capacitive, html 5, Html5, monza, review, rim, smartphone, touchscreen, video, wtorch
All products recommended by Engadget are selected by our editorial team, independent of our parent company. Some of our stories include affiliate links. If you buy something through one of these links, we may earn an affiliate commission.
Share
Tweet
Share