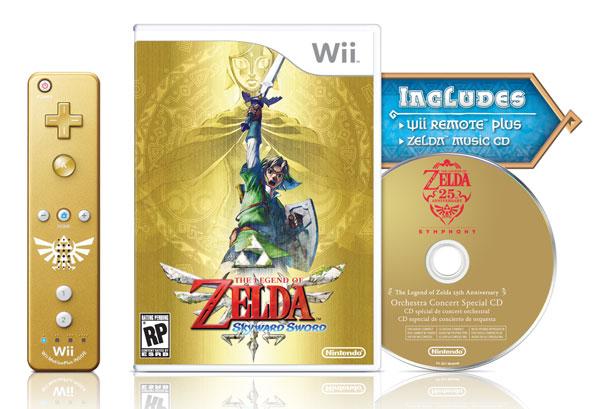 It's hard to believe Link (read: you) has been saving Hyrule and the kidnap-prone Zelda for 25 long years. To commemorate this video gaming milestone, and its upcoming Skyward Sword installment, Nintendo's issuing a limited edition Fabergé egg. Alright, we kid, it's actually the golden Wii Remote Plus we told you about back at E3, except now we've got a release date and pricing. Hitting retailers' shelves on November 20th, gamers can opt for the golden remote bundle at $69.99, or the standalone game for $49.99. Although the swanky controller won't be sold separately, all initial units of both offerings will come with a gratis The Legend of Zelda 25th Anniversary Symphony Concert music CD. You can head past the break to check out the Big N's official presser.
Show full PR text
August 29, 2011 12:00 PM Eastern Daylight Time
The Legend of Zelda: Skyward Sword Bundle Highlights a Golden Autumn for Nintendo Games

REDMOND, Wash.--(BUSINESS WIRE)--Leaves won't be the only things turning gold this fall as Nintendo prepares to launch an extraordinary lineup of games for its Wii™, Nintendo 3DS™ and Nintendo DS™ game systems. At a recent meeting of GameStop retail store managers from across the United States, Nintendo of America's executive vice president of Sales & Marketing Scott Moffitt revealed new details about upcoming releases for several fan-favorite franchises:

A special limited-edition The Legend of Zelda™: Skyward Sword bundle containing the game and a gold* Wii Remote™ Plus controller will be available when the game launches on Nov. 20.
Also for The Legend of Zelda: Skyward Sword, every copy in the initial production of the game will come packaged with a special music CD featuring orchestral arrangements of select songs that will be performed at The Legend of Zelda 25th Anniversary Symphony Concert.
Nintendo will launch the upcoming Tetris®: Axis game for Nintendo 3DS systems on Oct. 2.
The Professor Layton and the Last Specter™ game for the Nintendo DS family of systems will launch Oct. 17.
"Nintendo has something for you this fall, no matter what type of gamer you are, no matter what Nintendo system you're playing," said Moffitt. "Whether you're looking for a world-spanning epic like The Legend of Zelda: Skyward Sword, the pick-up-and-play puzzle fun of Tetris: Axis or the mind-bending adventure of Professor Layton and the Last Specter, we've got you covered."

The limited-edition gold controller bundle for The Legend of Zelda: Skyward Sword will be offered at a suggested retail price of $69.99. The game will also be sold separately at a suggested retail price of $49.99, though the gold controller will only be available as part of the special bundle. As an additional 25th anniversary treat for fans who purchase the game early, every copy in the initial production, whether sold by itself or as a part of the limited-edition bundle, will come with a free CD featuring select orchestral arrangements of iconic music spanning the history of the franchise which will be performed at The Legend of Zelda 25th Anniversary Symphony Concert performances in October 2011. For more information about The Legend of Zelda: Skyward Sword, visit http://www.zelda.com/skywardsword.

The original portable Tetris® game was a smash hit on the Game Boy™ system. The new Tetris: Axis game lets players use the magic of the Nintendo 3DS system to jump into the action in 3D without the need for special glasses. The game includes more than 20 different modes – some familiar, some new. Up to eight players can compete in wireless multiplayer battles, even if only one player has a game card**. Tetris: Axis also makes use of the augmented-reality and SpotPass™ features of Nintendo 3DS. Tetris: Axis is part of a stirring fall lineup for Nintendo 3DS that also includes Pokémon™ Rumble Blast (launching Oct. 24), Super Mario 3D Land™ (November) and Mario Kart™ 7 (December).

* Note that the gold controller will simply be gold in color and will not contain any actual precious metals.

** Multiplayer mode requires multiple Nintendo 3DS systems, each sold separately.
In this article: bundle, Legend of Zelda, LegendOfZelda, limited edition, LimitedEdition, motionplus, release date, ReleaseDate, The Legend of Zelda : Skyward Sword, TheLegendOfZelda:SkywardSword, wii, wii controller, WiiController, wiimote, zelda
All products recommended by Engadget are selected by our editorial team, independent of our parent company. Some of our stories include affiliate links. If you buy something through one of these links, we may earn an affiliate commission.
Share
Tweet
Share