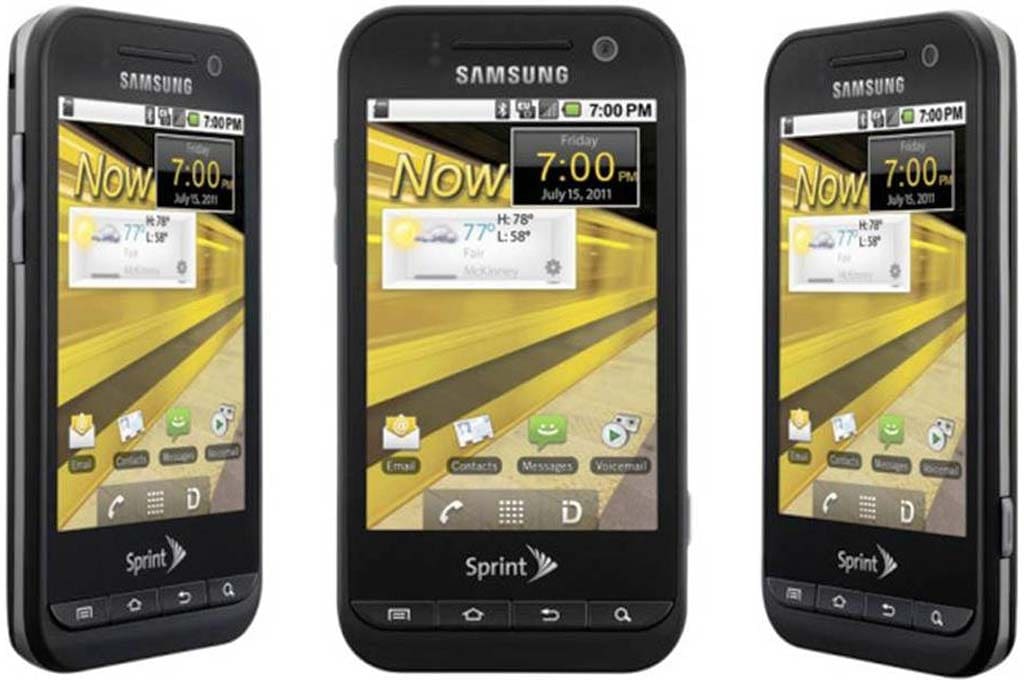 Apple's request to block Samsung Galaxy tablet,
HTC Amaze 4G, Samsung Galaxy S II sign-up pages go live on T-Mobile
Lenovo LePhone S760 shows up with Android 2.3.5 and 3.7-inch AMOLED display
It's peculiar how a simple number and letter can cause the price to skyrocket when added to the end of a phone's name. But that's exactly what the term "4G" does -- ultimately, making a phone or tablet compatible with a carrier's next-generation network seems to add value (and cost) in unthinkable ways. There's a growing concern in the mobile industry; Sprint's WiMAX 4G coverage, once a novelty in the United States, is now just one of the boys. It faces direct competition against its two (much larger) LTE brethren in Verizon and AT&T, and the Now Network is searching for other methods of utilizing its high-speed offerings. In doing so, the carrier wants to keep the value high without escalating the expense.

Enter the Samsung Conquer 4G, the latest addition to Sprint's blazing-fast lineup. Rather than going head-to-head with giants like the Photon 4G and EVO 3D, the company's strategy is to offer a WiMAX-enabled handset that's light on the wallet. It's not the least expensive of the bunch these days -- the Samsung Nexus S 4G takes the cake there -- but it's another option to toss into the network's growing lineup. So does this mid-range handset have a shot at living up to its namesake? Keep on reading to find out.

The Conquer 4G is a respectable midrange phone that performs admirably.

Be the first to review the Conquer 4G?
Your ratings help us make the buyer’s guide better for everyone.
Write a review

Had the Conquer 4G been released this time last year, it'd be considered quite close to top-of-the-line status. By today's standards, however, it's simply middle-of-the-road (read: not a phone you'll be whipping out at parties). But Sprint's not really attempting to showcase glitz and glamour here -- it has the EVO 3D and Photon 4G to hold the reins in that regard. Rather, it's meant to reside on the inexpensive end of the WiMAX spectrum -- $100 or less -- an area in its lineup that could certainly use a bit more attention.

In the case of this particular device, inexpensive doesn't mean cheap. In fact, it's a solid device with specs that are above-average for its price range. While it's clear a few features were chopped out or streamlined on the drawing board to lower the phone's cost, we can still make a fair number of comparisons between it and the LTE-packing HTC Thunderbolt and LG Revolution. Both handsets are powered by the same 1GHz single-core Qualcomm MSM8655 CPU, and the latter utilizes the same amount of RAM -- 512MB -- as the Conquer (the Thunderbolt is slightly higher at 768MB).

At 4.1 ounces (116g), the Conquer is incredibly light, at least in part due to the device's plastic build, smaller 3.5-inch screen and lack of physical keyboard. Still, unlike many other similar handsets, it doesn't feel like it's going to disintegrate in our hand. Accidental drops aren't as likely, thanks to its petite size -- the phone registers at 4.57 x 2.38 x 0.46 inches (116 x 60 x 12mm) -- and the EVO 3D-esque textured back, which provides much more friction than glossy backs while managing to keep the fingerprints away at the same time.

A total of three buttons line the sides of the Conquer. The volume rocker graces the left, while the top side houses the obligatory 3.5mm headphone port. The right side, meanwhile, is interrupted only by a double-detent camera key. The micro-USB charging port and mic hang out on the bottom of the device. Its backside remains relatively litter-free as well, sporting only a 3.2 megapixel camera with an accompanying LED flash and speaker grille.

Flipping the phone around, we behold a 1.3 megapixel front-facing cam on the top right, with a set of four standard Android navigation buttons directly underneath the display. Samsung eschewed touch-sensitive keys in favor of physical ones, which have just the right amount of feedback. Of course, this means they aren't flush with the rest of the phone's display, but at least they're only sticking out a little and won't catch in your pocket or purse.

The phone's display leaves more to be desired. A lot more. After reviewing several devices that use HD (or near HD) resolution, it's hard not to notice the pixelation oozing out of the 3.5-inch HVGA (480 x 320) screen as if it were attacking our eyes from every angle. The difference, however, may not be so striking to anyone looking for their first smartphone or coming from a handset with similar resolution. That said, there's one specific detail about the display that we absolutely love: we were able to look at it easily in direct sunlight.

One consequence of a smaller display is having less real estate on the screen for a virtual keyboard. Sadly, the touchscreen keys seem slightly scrunched, which may prove frustrating for users with large fingers. We didn't have many issues typing with our medium-sized hands, though we did feel the need to double-check our work more often. A nice alternative to dealing with the smaller keyboard is Swype, which comes pre-installed. It's a polarizing feature, indeed -- one that will instill either genuine love or seething contempt -- but we appreciate the option nonetheless.

If you noticed the 3.2 megapixel count on the Conquer's spec sheet, your shoulders likely drooped in disappointment. Our experience was better than expected, however, as we found its performance to be more than competent. We wouldn't pit this David against the Goliath Nokia N8, obviously, but we've always appreciated Sammy's ability to throw in a sensor that performs above and beyond in comparison to the competition.

The camera uses the stock Gingerbread UI, which typically offers more settings than most branded devices. On the Conquer, you're given a lot of flexibility for a so-called low-end shooter -- macro mode, manual exposure adjustment, a larger-than-usual number of scene modes and auto exposure options such as frame average, center weighted and spot metering. Using the default settings, many daylight and cloudy shots appeared slightly washed-out, though we discovered that playing around with the exposure settings made a big difference. Unlike other cameras we've tested with similar specs, this one delivered low-light photos that were grainy, but still easy enough to make out.

We were also pleasantly surprised to find a physical camera button on the right-hand side of the phone, featuring a double-detent style. Such a button lets you press halfway down to secure a focus before actually snapping the picture; doing so offers you the ability to catch smiles and other great moments that could easily disappear within seconds.

Alongside the lower-end camera, the handset's VGA video capture resolution isn't exactly high-class either. That said, videos still turned out relatively smooth with only minor amounts of choppy motion. Colors remained a little too washed out in extremely bright conditions, but otherwise were perfectly fine. Just don't be throwing away that camcorder quite just yet, folks.

The Conquer 4G offers temptation for lovers and haters of vanilla Gingerbread alike. By default, the device comes preloaded with stock Android 2.3.4 with a few Sprint-inspired tweaks. But if additional customization makes your heart go pitter-patter, the Now Network replaces the browser icon on the bottom of the home screen with a button taking you to its iconic Sprint ID feature, which you can read more about in our review of the Samsung Transform last year. In short, the service bundles wallpapers, widgets, apps, wallpapers and even ringtones in packages, each with its own theme. Every ID can be downloaded and installed at your convenience, which can be a handy feature for novices who are still getting accustomed to their new Android device. Anyone who has been using the OS for a longer period of time, however, will likely prefer to keep with the vanilla UI and add widgets and apps to their liking.

Regardless of the phone's vanilla appearance, it's still a carrier-branded device, which means we found a few preloaded apps that cannot be uninstalled. Most of the usual Sprint suspects are there: Sprint Zone, Voicemail, YouTube, Qik, Talk, Sprint Mobile Wallet and ThinkFree Office are all bonded to the OS as well as a few other native Android programs. Thankfully, the list is kept to a minimum in comparison to other branded phones, but we would've fancied the ability to remove them when we want.

Since the Conquer 4G's CPU and RAM make it comparable to the Thunderbolt and Revolution, we took a few minutes to compare benchmarks for all three devices side-by-side. Here's how it fared against its 4G cousins:


So, how did our brave subject manage against the heavyweights? Not only did it hold its own, the Conquer bested its LTE rivals in four of the five tested benchmarks, losing only in Quadrant. Since our experience with the phone's performance has been rather pleasant, we weren't stunned by the results. The 1GHz CPU was able to keep up with our fierce usage requirements without breaking a sweat, the display was fluid and responsive to our every touch, and it gave us a consistently smooth ride the entire time we reviewed it. The only stutter we noticed was an occasional bit of lag when playing graphics-intensive games.

Battery life is rated at six hours, and it came pretty darn close in our test. In our battery rundown test, it played movies for five hours and 35 minutes straight before it was through. The 1,500mAh battery was able to provide us with almost a full day's charge -- roughly about 10 hours of consistent emailing, texting and other moderate tasks -- before we were compelled to find our nearest outlet.

We didn't experience any dropped calls or audio quality issues on the Conquer, though when running comparisons to the HTC EVO 3D, it consistently remained one bar behind. This could definitely be a concern if you already live in a region with notably weak Sprint reception, but we were unable to find any major concerns in areas of stronger coverage.

Make no mistake: the Conquer 4G isn't a high-performance phone living at the top of the class. Rather than hiding from that fact, however, it accepts -- nay, embraces -- the challenge and makes the best out of its components. We came out of the review satisfied with the product; first-time smartphone buyers and shoppers on a budget could certainly choose worse phones to spend their hard-earned money on. Yet for a device listed at $100 after a two-year commitment, we couldn't help but wonder why a few extras (such as a better display or camera) didn't make the final cut. We feel it's still at least a sensible choice -- it just doesn't necessarily fit the given name printed on its birth certificate.
In this article: 1ghz, 4g, android, android 2.3, android 2.3.4, android gingerbread, Android2.3, Android2.3.4, AndroidGingerbread, budget, conquer, conquer 4g, Conquer4g, gingerbread, google, midrange, mobilepostcross, review, samsung, samsung conquer 4g, SamsungConquer4g, sprint, sprint conquer, SprintConquer, video, wimax
All products recommended by Engadget are selected by our editorial team, independent of our parent company. Some of our stories include affiliate links. If you buy something through one of these links, we may earn an affiliate commission.
Share
Tweet
Share