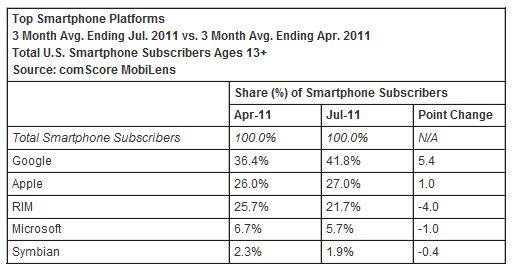 According to ComScore, out of the 82.2 million people in the US with a smartphone (up ten percent from last quarter), Android came in first as the biggest platform yet again, capturing a whopping 41.8 percent of the market like a boss. In a not-so-close second, Apple was able to snag 27 percent, followed by RIM in the third place spot with 21.7 percent -- down 4 percentage points from last quarter. Pulling up the rear is Microsoft with 5.7 percent, and lastly Symbian with a grim 1.9 percent -- both down when compared to the previous three months. As far as US hardware manufacturers goes, Samsung is still on top with 25.5 percent of the market, while LG got 20.9 percent and finally Motorola with 14.1 percent, down 1.5 percentage points from before. Apple was able to snag some standing in the OEM space with a 9.5 percent share, while BlackBerry-maker RIM only captured 7.6 percent. As the battle wages on, looks like Androids, iPhones, and BlackBerrys (oh my) are still on top -- at least for this quarter. Check out the PR after the break for the full scorecard.
Show full PR text
comScore Reports July 2011 U.S. Mobile Subscriber Market Share

82.2 million people in the U.S. owned smartphones during the three months ending in July 2011, up 10 percent from the preceding three month period. Google Android ranked as the top smartphone platform with 41.8 percent market share, up 5.4 percentage points. Apple strengthened its #2 position with 27.0 percent of the smartphone market, up 1.0 percentage points from the prior reporting period. RIM ranked third with 21.7 percent share, followed by Microsoft (5.7 percent) and Symbian (1.9 percent).

In July, 70 percent of U.S. mobile subscribers used text messaging on their mobile device, up 1.2 percentage points. Browsers were used by 41.1 percent of subscribers (up 2.0 percentage points), while downloaded applications were used by 40.6 percent (up 2.8 percentage points). Accessing of social networking sites or blogs increased 2.1 percentage points to 30.1 percent of mobile subscribers. Game-playing was done by 27.8 percent of the mobile audience (up 1.6 percentage points), while 20.3 percent listened to music on their phones (up 2.3 percentage points).
In this article: android, apple, bada, BlackBerry, BlackBerry OS, BlackberryOs, carriers, cellphone, ComScore, google, hardware, ios, LG, manufacturers, market share, MarketShare, microsoft, mobilepostcross, motorola, OEM, platforms, research in motion, ResearchInMotion, RIM, samsung, smartphone, smartphone market, SmartphoneMarket, smartphones, statistics, stats, symbian, windows phone, windows phone 7, WindowsPhone, WindowsPhone7, wp7
All products recommended by Engadget are selected by our editorial team, independent of our parent company. Some of our stories include affiliate links. If you buy something through one of these links, we may earn an affiliate commission.
Share
Tweet
Share