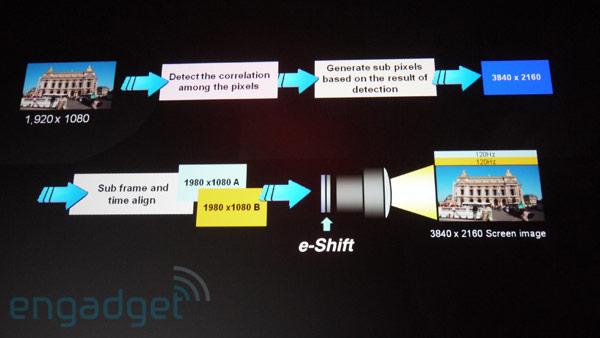 JVC first brought 4K home with its $175k DLA-RS4000 and now it's back with four new models with greater than HD resolution at much easier to swallow prices. You'll note the term used is "with 4K precision", because strictly speaking these don't project over 4,000 pixels of horizontal resolution, coming in at a still impressive 3,840 x 2,160 resolution. While this is still about four times the number of a standard HD image, it's less than say, Sony's VPL-VW1000ES. Filling in the difference is JVC's e-Shift technology, which was originally developed for its 8K projector. It works by creating two 1080p frames, with one shifted down diagonally and alternated at 120Hz to create the effect.

The scheme is not far off from the old wobulation technology featured in some "1080p" DLPs once upon a time, but this time there are no moving parts as it's all being done electronically. Shown off with an HD resolution source the upscaled image was still impressively sharp to us, even up close, while it also handles native 4K feed. While JVC may not be winning on raw pixel count, what it does have is a serious price advantage. Sony indicated its hardware would be available for "less than $25,000" but the top of the line JVC has an MSRP of just $12k, while the cheaper model will be $7,999 when they all ship in November. Check out the press release after the break and images in the gallery for details, including those so rarely seen native contrast ratio measurements.

Earlier this year NHK Science & Technology Research Laboratories, NHK Engineering Service Inc. and JVC Kenwood Corporation collaborated in the development of a Super High Vision projection system that utilizes e-Shift technology. Now, that technology is available in the DLA-X90R, DLA-X70R, DLA-RS65 and DLA-RS55. Using e-Shift, 2D HD content is upconverted and scaled to a 4K signal (3840 x 2160) and the e-Shift technology displays it at full 4K precision. Compared to a Full HD (1920 x 1080) image, that's twice the horizontal and vertical resolution and four times the number of pixels, or over 8 megapixels. The result is a stunningly detailed image with minimal aliasing artifacts found in standard HD displays.

All seven projectors are 3D-enabled and offer several 3D performance and feature enhancements:
• 2D-to-3D Converter – Converts 2D program material to 3D using technology derived from JVC's professional 2D-to-3D converter. Included are user adjustments for 3D depth and subtitle geometry correction;
• JVC's 3D anamorphic feature combined with an optional anamorphic lens make it possible to enjoy 3D movies in the popular 2:35 scope format;
• Compatibility with a wider range of 3D broadcasts, including 1080p/24 and 720p side-by-side formats;
• Brighter 3D images than previous models are possible through the use of an improved driver that keeps the shutter on the active shutter 3D glasses open longer, thus allowing more light to enter, while at the same time minimizing cross talk;
• A Cross Talk Canceller further reduces cross talk through analysis of the left eye and right eye signals and applying appropriate correction;
• A parallax adjustment allows the user to tailor the 3D image effect;
• Direct access to 3D formats and settings on the remote control.

In addition, the top four models -- DLA-X90R, DLA-X70R, DLA-RS65 and DLA-RS55 – have been designed to achieve THX® 3D certification and are scheduled for testing by THX. During the THX 3D certification process, more than 400 laboratory tests are conducted, evaluating color accuracy, cross-talk, viewing angles and video processing to ensure the superior out-of-the-box 3D and 2D display performance that home theater enthusiasts demand.

To provide enthusiasts with a true measure of performance, JVC has long focused on native contrast and refused to artificially enhance contrast specifications through the use of a dynamic iris. For 2012, native contrast has been improved across the entire line, ensuring that every frame consistently and faithfully reproduces peak whites and deep blacks.

The new flagship projectors, the DLA-X90R and DLA-RS65, are built using hand-selected, hand-tested components and provide a 120,000:1 native contrast ratio. For 3D viewing, both models come with two pairs of 3D glasses and a PK-EM1 3D Signal Emitter. Both projectors also have a three-year warranty.


In addition to the JVC PK-AG1 active shutter 3D glasses currently available, JVC announced new glasses – the PK-AG2, which are more compact, lighter and rechargeable. The PK-AG1 glasses remain available and are ideal for use over eyeglasses. Both models are compatible with the currently available PK-EM1 3D Signal Emitter.

About JVC Americas Corp.
Headquartered in Wayne, New Jersey, JVC Americas Corp. is a wholly-owned subsidiary of JVC Kenwood Corporation. JVC Americas distributes a complete line of video and audio equipment for the consumer and professional markets. For further product information, visit JVC's website.
In this article: 120hz, 4k, cedia, cedia 2011, Cedia2011, contrast ratio, ContrastRatio, dlp, e-shift, hands-on, hdpostmini, jvc, projector, upconvert
All products recommended by Engadget are selected by our editorial team, independent of our parent company. Some of our stories include affiliate links. If you buy something through one of these links, we may earn an affiliate commission.
Share
Tweet
Share