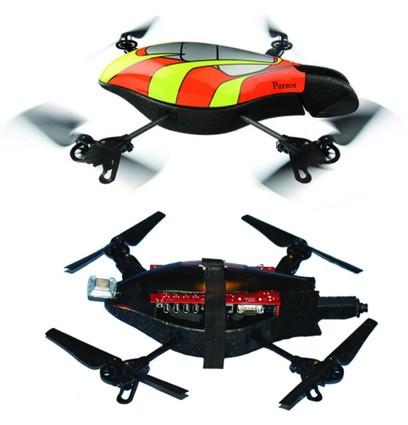 You'd think scientists would proscribe certain names for their inventions -- you wouldn't be taken seriously if your supercomputer was called HAL 9000, WOPR or Proteus IV would you? Well, a team from the Stevens Institute of Technology isn't listening, because it's developing an aerial drone and calling it SkyNET. A Linux box, strapped to a Parrot A.R. Drone, can fly within range of your home wireless network and electronically attack it from the air. Whilst internet-only attacks are traceable to some extent, drone attacks are difficult to detect until it's too late -- you'd have to catch it in the act and chase it off with a long-handled pitchfork, or something. The team is working on refining the technology to make it cheaper than the $600 it currently costs and advise that people toughen up their domestic wireless security. We advise they stop pushing us ever closer towards the Robopocalypse.
In this article: Aerial Drone, AerialDrone, Botnet, Botnets, Drone, Drone Copter, DroneCopter, Hack, Hacking, HAL 9000, Hal9000, Home Wireless Security, HomeWirelessSecurity, Network, Networking, Parrot AR Drone, ParrotArDrone, Proteus IV, ProteusIv, Quadcopter, Robopocalypse, Secure, Security, SIT, SkyNet, Stevens Institute Of Technology, StevensInstituteOfTechnology, WiFi, Wireless, Wireless Hack, Wireless Security, WirelessHack, WirelessSecurity, WOPR
All products recommended by Engadget are selected by our editorial team, independent of our parent company. Some of our stories include affiliate links. If you buy something through one of these links, we may earn an affiliate commission.
Share
Tweet
Share