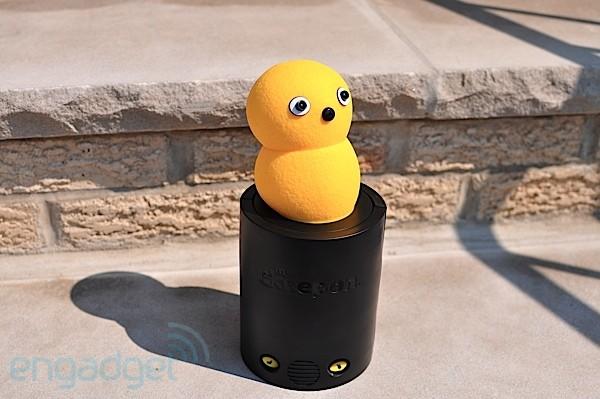 See that little dude up there? That's My Keepon, and it should look familiar if you're a fan of Spoon or keeping up with autism and related human interaction research. It was just about four years ago when we glimpsed the original dancing research robot by BeatBots dubbed Keepon, and now the $50 toy version we'd been teased is finally set to make its debut this holiday season. Considering its Pro sibling costs nearly $30k, we were curious to see how well this version made by Wow! Stuff would keep the original's essence in tow. To find out, we spent some time with a pre-production unit and had Marek Michalowski, co-inventor of the robot, walk us through it. 
Essentially, My Keepon has two modes: dance and touch -- the company won't reveal much about what's going on inside, but it's pretty clear once you use it for a few minutes. This Keepon's got a few sensors strewn around its insides: a button atop its head and four squeeze points on its lower half. The base houses the rest of its internal motors, and acts as a stage upon which Little K can spin around on while dancing or appearing to search for interaction. The bottom of said base also acts as a battery compartment for a whopping eight AAs, which we're told will keep it powered for a few hours. Thankfully, there's also an input for a power adapter, but one won't be included when it hits retail.

Depending on how you press My Keepon, you'll get a variety of quirky and cute reactions from tilting to bouncing, along with accompanying sound effects. The texture is quite odd to say the least -- it's sort of like a stretchy rubber with a mild amount of tack to it. On a negative note, it seems to be a dirt magnet, which doesn't bode well for its vivid yellow exterior being handled peanut butter encrusted fingers. The eyes have no cameras like the Pro, but there's a microphone placed in its nose that reacts to scratching with an animated sneeze. That microphone also serves the dual purpose of letting MK dance with near expert timing.


In dance mode, My Keepon listens for a tempo and begins strutting its stuff within a few seconds, matching the groove. We noticed that while dancing it would pause after a few bursts seeming to make sure it was still in time before starting up again. We're told this is normal, but it's a shame MK looks to be reluctant about holding a groove for more than a few passes. The motors on Little K also sounded fairly noisy, but with moderate levels of music playing they were mostly washed away -- we can only hope that they might end up just a bit quieter in the final run. Of all the music we played, dubstep and punk rock seemed to get it going the most. Switching between faster and slower sections were met with relative ease and usually close to the mark considering how often My Keepon likes to double check.


If you're already swooning for your own piece of the cuteness, My Keepon is currently available for pre-order at Toys 'R' Us for about $50, with part of the proceeds will be set aside to fund future Pro versions in their autism research. There are more details in the source link below, but the meantime, you'll just have to hit the replay button on the videos above for a double douse of adorable.

In this article: beat bots, beatbots, cute, dancing robot, DancingRobot, hands-on, keepon, Marek Michalowski, MarekMichalowski, metronome, music, my keepon, MyKeepon, robot, robot apocalypse, RobotApocalypse, toy, video, wow stuff, WowStuff
All products recommended by Engadget are selected by our editorial team, independent of our parent company. Some of our stories include affiliate links. If you buy something through one of these links, we may earn an affiliate commission.
Share
Tweet
Share