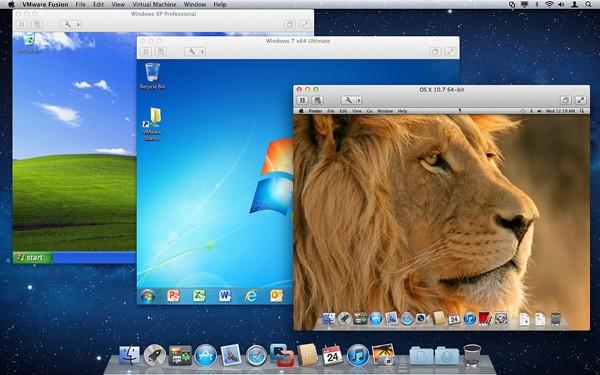 Leave it to VMware to put the spotlight back on Lion when this is, without a doubt, Windows 8's week. The company just announced Fusion 4, the latest version of its virtualization software, and, as you'd expect, it pledges to play nice with Apple's newly minted OS. In addition to fully supporting Lion features like Spotlight, though, it makes Windows look more like, well, a Mac. The software includes improved support for Expose and Spaces on the Windows side, and adds the ability to use Mission Control and launch Windows apps from Launchpad. Additionally, you can run Lion as a virtual machine within Snow Leopard and VMware makes vague claims about improved performance, 3D graphics and resource-hogging. It'll cost $50 through the end of the year, with the price jumping up to $80 in January. Fittingly enough, VMware picked up on the fact that Apple's moving away from optical drives, and instead chose to ship the software with a USB drive (you can also download it and do the whole drag-and-drop installation thing). Oh, and if you bought the last-gen version of the software on July 20th or later, you'll get the new version gratis. Lots of screen shots below, and full PR after the break.

PALO ALTO, Calif., Sept. 14, 2011 - VMware, Inc. (NYSE: VMW), the global leader in virtualization and cloud infrastructure, today announced VMware Fusion® 4 – the best way to run Windows on a Mac. Available now at VMware.com for a promotional price of $49.99, VMware Fusion 4 makes it easier than ever for users to run Windows applications with Mac simplicity.

"Enhancements to VMware Fusion® 4 make it a breeze to run Windows and Mac Applications side by side on a Mac," said Pat Lee, director, client product management, VMware. "Offering full integration into Apple OS X Lion, VMware Fusion 4 builds on our proven, award winning platform to provide an easy, fast and reliable way to run Windows applications on a Mac."

With more than 90 new features and now optimized for today's multi-core Macs and OS X Lion, key features in VMware Fusion 4 include:

Switching Made Easy
VMware Fusion's migration assistant for Windows makes it easier than ever for users to transfer their entire PC to a Mac, allowing them to make the most of their existing Windows software investment. With VMware Fusion 4 users can get the best of both worlds and have access to Windows programs and files from their PC directly on their Mac, whenever they need them.

Availability and Pricing
VMware Fusion® 4 is available until the end of the year for a promotional price of only $49.99. The suggested retail price for VMware Fusion 4 is $79.99. Customers who have purchased VMware Fusion 3 on or after the July 20, 2011 are eligible for an electronic upgrade to VMware Fusion 4 at no additional cost. Volume pricing for corporate users is available from select resellers and www.vmware.com/fusion.

VMware Fusion 4 is available immediately for download and purchase from vmware.com. VMware Fusion box products will be available at key resellers including Apple, Apple.com, Amazon.com, Best Buy, Fry's Electronics and many other stores in the coming days. VMware Fusion is available in English, German, French, Italian, Spanish, Simplified Chinese and Japanese.