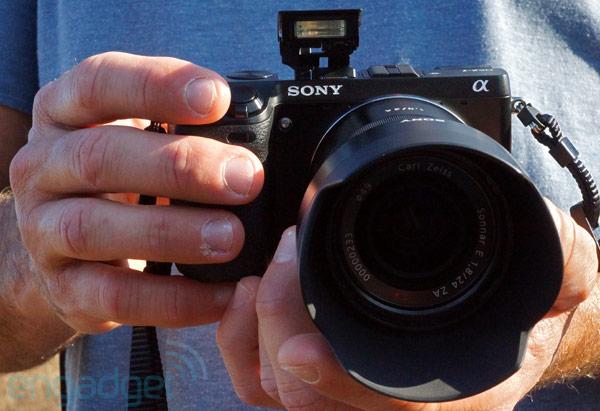 There are some cameras that we would be willing to use in a bind, some that we wouldn't hesitate to shoot with, and a very select few that would motivate a cross-country journey, just for the chance to spend a few days behind the lens. Sony's Alpha NEX-7 falls within that incredibly unique final category -- in fact, we've done just that, flying from New York to San Diego to go hands-on with one of only a half-dozen pre-production samples to have landed on American soil. After seeing a very early NEX-7 prototype a few months ago, it didn't take much convincing to get us on a plane.

Sony's 24.3 megapixel APS-C masterpiece represents a giant leap forward for the interchangeable lens market, theoretically capable of capturing images identical in quality to its much larger Alpha A77 counterpart, but in a body only slightly larger than the NEX-C3. Pair that image quality with an XGA OLED electronic viewfinder, a revamped tri-navi interface, standard hot-shoe, 1080 / 60p AVCHD video, microphone input, and a built-in flash, and you have one very worthy compact DSLR replacement. That said, the NEX-7 kit's $1,350 price tag is far more than many are willing to spend on a camera. But is that premium pricing justified? Jump past the break to find out. The NEX-7 may not be unbelievably petite, but it is small. It's not as compact as the NEX-C3 -- a camera which had previously represented the benchmark for this category -- but considering everything that it has to offer, we don't have any complaints about size. The magnesium alloy body isn't as light as you might expect, though it feels quite solid and durable. It's difficult to criticize the camera's construction -- Sony really didn't skip a beat here. If we're really being critical, we wouldn't mind seeing the NEX-7 shed an ounce or two, but if you're used to carrying around a DSLR, you'll probably call foul at the mere suggestion that this camera has too much heft.

The camera grew in each direction to accommodate a handful of new hardware features. The XGA-resolution OLED electronic viewfinder is arguably the highlight here, complementing the 3-inch articulating LCD with a much-needed EVF. This is the same viewfinder found on the A77 -- it's bright, sharp and beautiful. No EVF will ever replace a top-of-the-line optical viewfinder, but this one comes very close. And you'll receive a few other benefits as well, including a high-res information readout, exposure- and white balance-accurate representation, and a horizontal position indicator.

Other additions include a full-size hot shoe, capable of accommodating the same external flashes as Sony's DSLR series, along with a new shoe-mounted external microphone that connects to the camera's microphone input jack (!). The built-in flash is of the pop-up variety, and is a welcome addition. It's a basic direct flash, however, and we all know how lousy direct flash images look -- those captured with the NEX-7 are no exception, though with great high-ISO performance and a new f/1.8 lens option, you'll probably be able to get away without using it.

Like full-size DSLRs, the NEX-7 was built with professionals in mind -- and pros need speed. Not only can the camera power on and shoot an image in just over a second, it also captures full-res images at up to 10 frames per second. Even many larger cameras don't offer that. We doubt you'll be using this camera to shoot touchdowns from the 50 yard line or a match-winning serve from the nosebleed section, but with that impressive frame rate and Sony's LA-EA2 Alpha-series adapter paired with a 300mm G-Series lens, you certainly could.

Video capture isn't an afterthought on most cameras these days, and it certainly isn't on the NEX-7. Like the A77, you can capture video at a variety of sizes and frame rates, all the way up to 1080 / 60p in AVCHD mode. You can also shoot 1080 / 60i and 24p AVCHD video, or 1080i MP4 video, should you wish to shoot directly in everyone's favorite web-friendly format. You also have full control over aperture and shutter speed in video mode. Finally. Like with other NEX-series cameras, there's a dedicated video capture button, so you can start shooting moving pictures immediately before and after snapping a still.

The NEX-7 uses the same 24.3-megapixel APS-C sensor that you'll find in the larger (and pricier) Alpha A77. It goes without saying that photos you'll shoot with both cameras will be huge -- you should budget up to eight megabytes for each full-res, high-quality JPEG (and significantly more for RAW images). But besides filling your SD card quickly, photos look fantastic as well. Sony confirmed that the camera's "sweet spot" We noticed minor sharpness issues when using the camera with A- and E-mount lenses above f/5.6, so even though you can now shoot photos at up to f/1.8, you'll want to bump down the aperture a bit if you want the absolute sharpest images. Likewise, you'll be able to capture greater depth of field detail at, say, f/10, but images won't appear as sharp at a 100 percent view as they will at f/5.6. You'll find a selection of untouched sample images in the gallery below, and a link to download full-size originals just above the comments section.

We shot video in a variety of conditions with the NEX-7. The first thing we noticed is that focusing in video mode isn't quite as fast as it was with the A77. While that full-size DSLR uses phase detection, the NEX uses slower contrast detection technology. It's not painfully slow, but the difference is certainly noticeable. Pop on that LA-EA2 adapter and an A-mount lens, however, and you'll be able to keep up with the big boys, thanks to the adapter's built-in phase detection autofocus. Beyond that, video looked great, as you'll see in the clips below.

Besides its slick high-res EVF (and that 24.3 megapixel sensor), the NEX-7's unique user interface is another star of the show. A trio of control wheels let you adjust more key settings on the fly without jumping into menus, and a function button gives these dials even more control, letting you cycle through four additional interface configurations. By default, the top left dial controls aperture, the top right dial adjusts shutter speed, while the rear wheel lets you change the ISO. Some advanced control options include focus mode, exposure points, picture effect options, and the like. We still think Sony has room to improve the main settings menu, but with these new dials, you'll spend much less time digging through it.

Though a vastly more functional improvement over the early NEX-7 we saw briefly demoed earlier this summer, the camera is still several months away from release, and the model we used this week is not a final production sample. Though it might as well be -- we only experienced one issue with this version (when paired with a 70-400mm A-mount lens, we needed to remove the battery to get it to shoot, on several occasions). As you might have gathered, we really love this camera -- it's the first of its size from any manufacturer that could replace a DSLR for almost any photographer, and, while expensive, offers a tremendous amount of bang for your buck. It's at this point when evaluating a pre-production sample that we'd chalk issues up to the fact that this version is far from final -- but honestly, if the NEX-7 were available for purchase right now, even in its current state, we wouldn't hesitate to pick one up.


Update: The sharpness issue we experienced with smaller apertures is related to lens diffraction, not the camera's sensor. The preview has been updated to reflect this.
In this article: alpha, alpha nex-7, AlphaNex-7, camera, dslr, hands-on, ilc, impressions, interchangeable lens camera, InterchangeableLensCamera, nex, nex-7, photography, preview, sony, sony alpha, sony alpha nex-7, sony nex, sony nex-7, sony nex-c3, SonyAlpha, SonyAlphaNex-7, SonyNex, SonyNex-7, SonyNex-c3, video
All products recommended by Engadget are selected by our editorial team, independent of our parent company. Some of our stories include affiliate links. If you buy something through one of these links, we may earn an affiliate commission.
Share
Tweet
Share