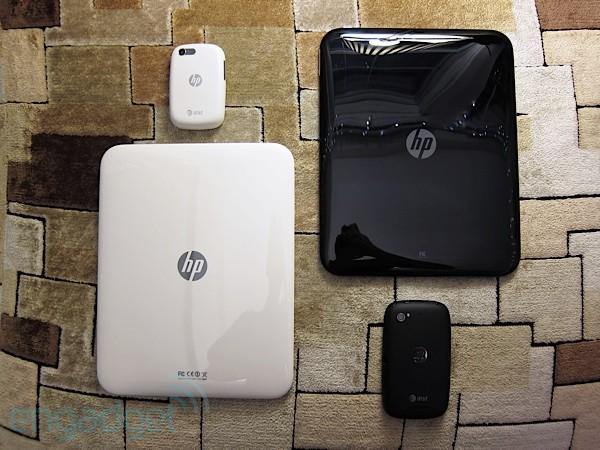 What's this? Some of HP's unreleased WebOS devices? Well yes! Say hello to the white European TouchPad, the black TouchPad 4G for AT&T, the Pre 3 4G for AT&T, and our very own Veer 4G review unit, all gathered on a fine specimen of mid-century modern upholstery. We were able to unbox these devices and handle the hardware, but the software was off limits. The owner of the Pre 3 did activate it for us, but that's as far as we were able to go. While still heavier and thicker than the competition, the white TouchPad -- a 64GB model with the faster 1.5GHz CPU -- is significantly more attractive than its black sibling, and less of a fingerprint magnet to boot. AT&T's TouchPad 4G -- with 32GB of storage and the same 1.5GHz processor -- features a working SIM slot for the carrier's faux-G network (HSPA+), but is otherwise cosmetically identical to the existing WiFi version. The Pre 3 is the same phone we handled during HP's announcement last February, save for the AT&T logo on the back. Check out our gallery below, and hit the break for our hands-on video.