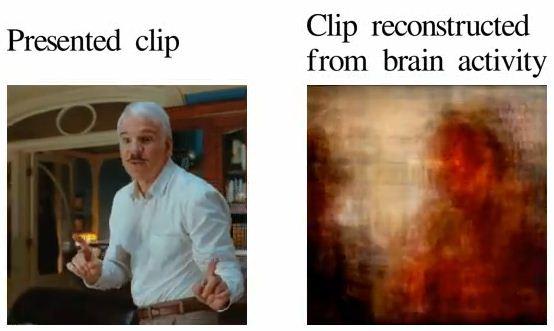 This is your brain. And now this is your brain on YouTube. By using functional magnetic resonance imaging (fMRI) software, researchers at UC Berkeley created a visual representation of what our brains see when we watch a TV or movie. It works as such: scientists show subjects random clips and measure the corresponding cerebral activity. After the computer "learns" what vids evoke what brain activity, scientists feed 18 million seconds of random YouTube videos into the computer program where it reconstructs a movie representation of neural happenings based on the hundred clips most similar to what it sees. Although the method currently only works with images actually viewed, the future goal is to recreate what people see in their dreams and memories -- which could give doctors major insight to the minds of the mentally impaired, stroke victims or those with neurological disorders. Inception in real life isn't exactly around the corner, but the implications of this new technology are pretty mind-blowing. See for yourself in the video after the break -- no totem required.

In this article: brain, brain imaging software, BrainImagingSoftware, cerebral cortex, CerebralCortex, fmr, functional magnetic resonance imaging, FunctionalMagneticResonanceImaging, mind reader, mind reading, MindReader, MindReading, mri, UC berkeley, UcBerkeley, video, videos, YouTube
All products recommended by Engadget are selected by our editorial team, independent of our parent company. Some of our stories include affiliate links. If you buy something through one of these links, we may earn an affiliate commission.