Amazon's back-to-school deals include a $75 Echo Plus

Grab an Amazon Kindle for $65 in time for Father's Day 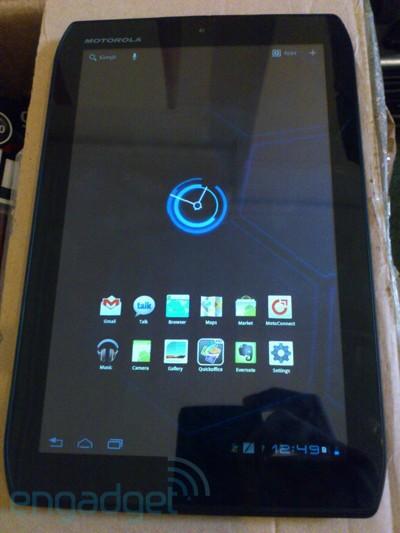 Talk of a younger, slimmer Motorola Xoom just keeps on coming. A helpful tipster is adding fuel to the rumors of a Xoom 2 with these shots of a similar, but not exactly identical Motorola tablet. When compared to the images we saw yesterday, this unnamed Android 3.2 slate looks a tad less polished in the rear and seems to favor a portrait format, with the camera resting up top. What's more, our source says the slab appears to be smaller than what we've already seen, which could line up with a report from This Is My Next, pegging a Xoom 2 Media Edition. That device is rumored to have an 8.2-inch HD IPS display and weigh .95 pounds. It is apparently being billed as an "e-reader replacement," and comes with an onboard IR remote and subwoofer. In further Xoom 2 news, TIMN is saying the classic version will measure 9mm thick, pack a 1.2GHz processor, 1GB RAM, and enable 1080p video recording. If all of that isn't enough to satisfy your Motorola-tablet craving, we've got a gallery of photos below.


[Thanks, Anon]
In this article: e-reader, ereader, hd, honeycomb, ir blaster, ir remote, IrBlaster, IrRemote, leak, media edition, MediaEdition, moto, Motorola, motorola xoom, motorola xoom 2, MotorolaXoom, MotorolaXoom2, slate, speculation, tablet, xoom 2, Xoom2, xoom2 media edition, Xoom2MediaEdition
All products recommended by Engadget are selected by our editorial team, independent of our parent company. Some of our stories include affiliate links. If you buy something through one of these links, we may earn an affiliate commission.
Share
Tweet
Share