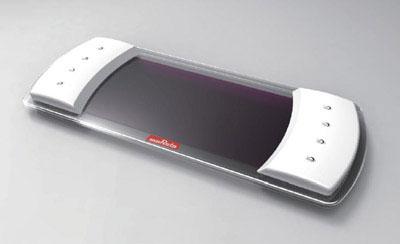 We've seen Murata's marketing future, and it involves either Chubby Checker or that '90s Helen Hunt movie. The Japanese electronics maker's cooked up a flexible sensor device that'll let you twist and shout bend your way to remote television control. Dubbed the Leaf Grip Remote Controller, the prototype UI design makes use of a special pyroelectric effect-free piezoelectric film that translates twisting into channel changing, rapid twisting to swap video inputs, bending for volume control and rapid bending to power the set on / off. The company's also outfitted the non-clicker (which we'll henceforth refer to as "the Twister") with a photovoltaic cell, giving it the ability to charge -- from your man cave? Kinks in its planning aside, sample shipments are expected to be delivered sometime next spring. But, before they rush this product out to market, may we suggest the inclusion of a sports-induced rage-proof mode?
In this article: flexible, Leaf Grip Remote Controller, LeafGripRemoteController, Murata, photovoltaic, piezoelectric, piezoelectrics, remote control, RemoteControl, solar power, SolarPower, television
All products recommended by Engadget are selected by our editorial team, independent of our parent company. Some of our stories include affiliate links. If you buy something through one of these links, we may earn an affiliate commission.
Share
Tweet
Share